2020 looks to be a busy year for Silverline…and that’s pretty exciting to all of us! 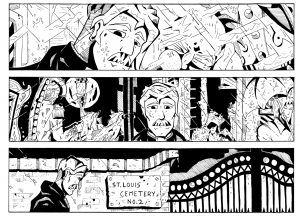 For non-comics, we’ll be launching a weekly live stream. Current plan is for them to be Wednesday’s at 8pm EST. We’ll have a couple of different segments, including an indy comic review and a segment on the craft of making comics. Stay tuned for the exact launch date for it.

We’re still working on appearances for 2020, we’ve already been invited back to Daytona Beach Comic Con—and have accepted. Just not sure exactly which ones of us will be there. Roland will be at Three Rivers in Pittsburgh, his first show ever in the state of PA! More dates and appearances to come, be we hope to see a bunch of you at a bunch of shows!

We’ve got a big slate of books we’ll be releasing in 2020, so many that we may experiment with some Silverline crowdfund “packages.” Meaning, more than one book per crowdfund. Honestly, it’s exciting to look at this list to see all the content will be delivering to you—we know you’re gonna like them!

Mentioned last week in title only, the projects that are nearly complete and should ready to crowdfund very soon:

*Bloodline, 1 shot: by Sidney Williams (writer), Rob Sachetto (penciller), Terry Pallot (inker), Brian Dale (letterer). This one is finished except for the colors, which is being done by Keith Wood. 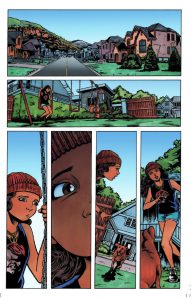 A page from DIVINITY #1

A bit later in the year, these should be ready: 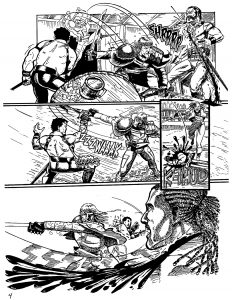 A page from WHITE DEVIL #1

It’s pretty exciting for us to be able to report to you that the kickstarter for the 2nd issue of C&M is fully funded and still in search of some stretch goals. If you’ve backed, thank you. If you’ve shared, thank you. If you haven’t shared—what are you waiting on? That’s EASY to do. If you haven’t backed, take a peek at it again—bet there’s something there for you! There are still several original art rewards left.

So if you’re into original art, there’s still some great choices for you! And, coming later today will be a new reward tier. Our Colonel of Color, Kevin Gallegly has created some MOUSE earrings. They are sweet! So be on the lookout for those—probably 7-ish (EST) this evening. 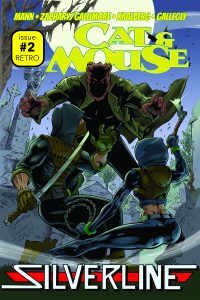 The art rewards for Kayless #1 are all out. So Kayless is now 100% fulfilled. For those who had art, we apologize for the delay. It took longer to get the art from Luis than we anticipated because it came all the way from Argentina!

The good news is that the Kayless team is about 10 pages into #2, so it’s moving right along!

There are still several projects in various stages of completion. We won’t go too deep into any one of them until they’re nearly ready to present to you. But just a run-down to keep you posted.

Bloodline (one-shot) – by Sidney Williams (writer), Rob Sachetto (penciller), Terry Pallot (inker), and Keith Wood (colorist). The only thing remaining on this one is the colors!

Divinity (4 issue mini) – by Barb Kaalberg/R.A. Jones (writers), Alex Sarabia (penciller), Barb Kaalberg (inker), Mike W. Belcher (letterer), and we’re about 95% settled on the colorist…but not yet. If we can get who we’re trying—you’re gonna love it! The art team is almost 10 pages into the first issue with this one, too. Can’t wait to show you some of this! WOW!

Speck (OGN) – Roland Mann with Alan McMillian and Bill Nichols. Wait…we can’t talk about this one just yet. Who put this here? Sorry, dear reader, you’ll have to be patient.

We’ve been doing some creator spotlights and will keep doing them, but in coming posts, we’ll be talking about some of the folks that work behind the scenes at Silverline. Those of you who have known Roland for a long time, or have known Silverline for a long time know that Silverline was Roland and Steven when it first started in the 80s(I’ve taken to calling that Phase 1), but it was all Roland in the 90s (Phase 2). As this is Roland writing this post, I’ll say that I couldn’t do it this time (yes, I’m calling this Phase 3) without all the help. Though Dean Zachary had life changes that doesn’t allow him to participate at the moment, his encouragement with Barb and Kevin and their offers to help are really what launched Phase 3. BUT, I’ve assembled a nice little crew of talented people who love comics…and that’s really the lifeblood of Silverline: Love of comics.

Okay, before I get all sappy. I’ll stop there.

Kickstarter funds have just been received (after taking their cut, of course)! Brent Larson and Roland Mann will be taking a trip to Ka-Blam soon so Brent can slap his signature on a bunch of them before they ship out. Brent’s script for issue #2 is already in the hands of Luis! Yes, it’s true: Kayless #2 is already in production before you even get your hands on #1. How cool is that? 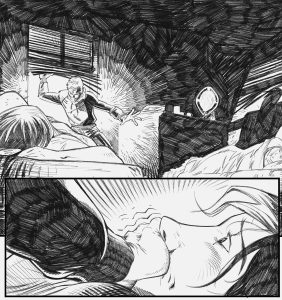 Alex Gallimore, Cat & Mouse’s new Lord of Lead is on the home stretch finishing up issue #2. Just to tease you with his awesomeness, here’s a panel from a recent page. We’re telling you now, keep your eyes on him. We predict great things for him, and you’ll be able to say you were there at the beginning supporting his work.

“I love the energy he brings to the pages,” said C&M scribe Roland, “It reminds me a lot of some of Mitch Byrd’s early work on the first volume. It’s the kind of pages that I can sit and stare at in an attempt to absorb all the energy!” 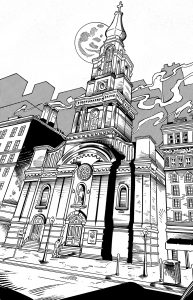 Cat & Mouse #2 is currently slated to be the next Silverline kickstarter after fulfillment of Kayless #1. “But it will be finished before we kickstart it,” Roland said. Cat & Mouse is the story of Brett, who gets a call from his ex-fiancé asking him to find her runaway kid sister and return her home. Brett goes to New Orleans only to find out said kid sister has been caught up in a human trafficking ring. Longtime fans will be excited to see the return of a key supporting character with issue #2. Attached also is a panel inked by Barb Kaalberg.

We know you hoped that with Silverline returning you’d see some familiar names and this is just that. When we reached out to R.A. about doing something for the thrice revamped label, we barely had the question out of our mouths and he said yes! The immediate second thought was “let’s see what Rob Davis thinks.” Like R.A., Rob was answering yes before we could finish the question.

Jones and Davis will be teaming up for a 4 issue mini-series titled Twilight Grimm: In the city of Hallowed Heights, there are the “haves,” the “have nots” — and those who feast upon the blood of both.

It isn’t scheduled yet, but you heard it here first!

If you thought the Empress of Inks Barb Kaalberg could “only” ink in an extraordinary fashion, think again. Barb has dreamed up an amazing tale she’s titled Divinity. It is still early on in the process, but we had to tell you as she was anxious to make Silverline home to her mini-series. More to come later.

Thank you for your support of Silverline!

You can find your favorite Silverline creators here August 2019: 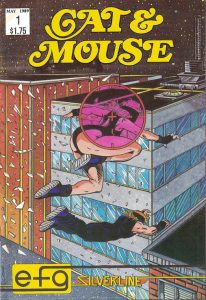