Hey there Silverline fam! You did it again! Another Kickstarter is fully funded. The Silverline Science Extravaganza has finished its run on Kickstarter and is getting ready to migrate to your mailboxes. If you weren’t able to get your order in quite yet, that’s alright. Soon enough, these titles will be available through the Silverline storefront on Indyplanet. But you will still have to wait until after the backers get their copies and you won’t get as many copies. (You also won’t get as many goodies.)

If you backed the Silverline Science Fiction Extravaganza be sure to keep an eye on your email, and also your Kickstarter message center. You should be receiving an invite to complete a survey soon. That survey is crucial as it allows us to make sure your books get to you. We want to make sure you get exactly what you ordered in the way that you ordered it. To do that, we need you to make sure we get it right. Fill out the survey to confirm your name and shipping info and make sure we know what bonus goodies you ordered.

Right now, those of you who backed Wolfhunter/ Sirens should be getting your flipbooks in the mail. Be sure to tell us what you think on our socials! We love to hear from you guys. The Instagram and Twitter posts of people opening their copies have been great to see. That coupled with knocking this Kickstarter campaign out of the park has made our week.

If you were looking forward to either of those titles but did not get a chance to preorder during the Kickstarter campaign, don’t fret. Those should be in our online store any day now. While you’re there you can also catch up on any titles you missed (I recommend Divinity).

This marks our 18th successfully funded Kickstarter! Our Kickstarters are old enough to vote in the US! We hope that you stay with us as we continue to grow. Soon enough, we’ll have Kickstarters 19 and 20, and 21, soon enough it’ll be off to college and falling in love. We’re still talking about crowdfunding right?

Make sure you’re following all the Silverline Socials as well as all our creators so that you don’t miss out on the next chance to preorder a Silverline comic. Each Kickstarter comes with juicy exclusives (juicy ‘sclusies?) and fans have told us they love them. Especially our collector’s bookmarks.

We’ll see you on the next Kickstarter, and hopefully, we see your name on the Thank You Page. Until next time,

We have another Silverline Content Spotlight for you. This week is an extra special episode. Kurtis, Silverline’s resident Kung-Fu expert, hosts the artist and crew involved with the Shadow Ghost inspired music video from Capitan Walas.

Shadow Ghost is the kung-fu comics by kung-fu master upcoming from Silverline! Sifu Kurtis Fujita created this comic to combine two of his passions. We’ve mentioned it before, but Kurtis is an actual Sifu, a certified instructor of kung-fu for health and competition. He also has a historied career in comics and entertainment. Combining the two into one dope comic series seemed like a kind of no brainer.

A few months ago Capitan Walas made a track and music video inspired by Shadow Ghost. The track, Drunken Tiger featuring Alan Yip on Erhu features themes from traditional Chinese music with a modern twist. The music video is also a great demonstration of practical martial arts and use of traditional Chinese weapons. “Capitan Walas is a Mexican musician based in California’s SF Bay Area. He has been a guitar/ guqin composer and martial arts practitioner since the early 2010s.

Capitan Walas, Alan Yip, Sifu Tony Tong, and Megan Wong join the the comics fu show to talk about their various backgrounds, influences, and behind the scenes production of the song/music video. This episode also features a screening of the video!

Be sure to check it out as it goes live today on the Silverline Comics Channel!

Only got time for another quick one this week. But we won’t need a blog where we’re going. That’s right, we’re headed back to the (comics) future!

Silverline has an upcoming Kickstarter that you can pre-save, right now! It’s a Science Fiction Extravaganza as we release a collection of 3 books with a sci-fi twist. This collection has some classic and some all new content for your reading pleasure!

This laser-fight-party will feature a Beyond The Stars, Krey, and Obsoletes. If you enjoy long walks on the moon or cantina folk jazz, then this is a can’t miss!

If you backed Wolf Hunter/Sirens Remix, we are working on getting those out of the print cycle and into a mailbox near you soon! Make sure you completed your Kickstarter survey, so that we can send it to the right mailbox!

If you want to help us keep the comics train rolling, head on over to the page for the Sci-Fi Extravaganza and hit that Notification Button.

Just a quick update this week!

Make sure to check your email! If you backed the Kickstarter for Sirens #1 Remix and Wolf Hunter #1, you’ll have received a few emails from Kickstarter to complete the survey. This survey is SUPER important. This allows us to collect your shipping address as well as the name you want us to put on the thank you page. If you want your name to be correct and your book to actually be sent to you, you need to complete this survey.

Your regular scheduled can resume when everyone, and I mean EVERYONE has completed their survey. So get to it soldiers. Up and at ’em!

I just want to congratulate everyone involved on another successful Kickstarter! That means you too! We wouldn’t be here without the readers and the backers. 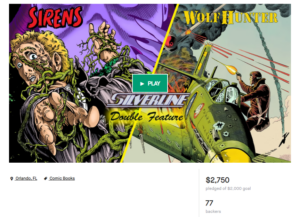 This Kickstarter had special significance to me. Wolf Hunter is my own comic and the story has been rattling around in my head for a few years now. The art on this comic is blowing my mind. I hope my story lives up to the dopeness that AJ, John, and Martin encased it in. I’m super proud of what we created and I CAN NOT WAIT for it to be in your hands.

Make sure to check you emails for surveys and updates. We’ll need to confirm your shipping info and make sure your name is right on the thank you page.

Of course I also need to shout out the incredible Sirens team as well. Sirens is a classic penned by my former college instructor Sidney Williams, and features incredible art work by John Drury, Chuck Bordell, and Barb Kaalberg. I loved this comic the first time I read it and can’t wait to turn through the pages with the new life breathed into this book. 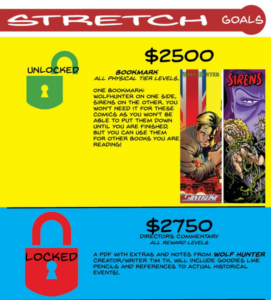 You all even backed these books so hard, that we hit our second stretch goal! That means that every backer will be getting a Historical Reference PDF that can be used as commentary and reference for Issue 1 of Wolf Hunter. In essence, your digital copy just got upgraded to a History Edition. If you backed at a physical reward level, you’ll also be getting a double sided bookmark featuring unique art from both Wolf Hunter and Sirens.

Again thank you so much, for backing these books! Be on the look for more Kickstarters in the future and remember to Make Mine Silverline!

We’re back at it again with another Kickstarter. One that it looks like you guys were prepared for, because we funded over the weekend! In fact you guys got us over 50% before the first official day! Holy cow, thank you all so much!

Obviously I have some bias here, but I think this is a really good pair of books. Wolf Hunter is my first comic book and has been rattling around in my brain for a few years. Honestly though, the artists working on this project really made it their own and elevated Wolf Hunter to a level I couldn’t imagine. AJ Cassetta, John Martin, and Martin Murtonen went really hard on this one. Of course I also have to mention the veteran Mike W Belcher on letters, without him my dialogue written would be literally worthless.

I really believe this is one spy thriller that is not going to look like any other out there.

If you didn’t know, Wolf Hunter is a spy story set in World War 2. The story starts during the Blitz and our hero, RAF Group Captain James Willard gets shot down and is heavily injured. Instead of being rehabbed and sent back to the front, the powers that be have other plans. Willard has a knack for insight in an age before forensic psychology. When a suspected German spy threatens the Allies most critical scientific mission, Churchill himself decides to make use of Willards talents to detect and neutralize the threat. 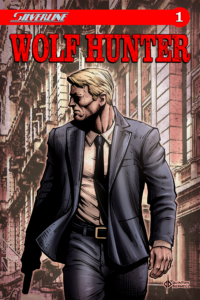 If you like Murder on the Orient, Tinker Taylor Soldier Spy, or are just a fan of the technology of WW2, this is the book for you.

The other book up for preorder is Sirens #1 Remix. Like our previous Remix, this is a comic that was originally released a few decades back but has been retouched and colored for a more contemporary look. Sirens is a story set in the vibrant New Orleans during Mardi Gras. The story follows investment broker Jeff Dalmer who has an unfortunate whirlwind romance with Lois Neville, a Loup-Garou. The end result is Jeff slowly turning into a zombie. He’ll have to beat the clock to find Lois and break the curse, or live the rest of his life as a sack of rotting flesh.

Sirens features an all-star team of Sid Williams (Writer), John Drury (Penciller), Chuck Bordell (Inker), Barb Kaalberg (Colorist), Brad Thomte (Letterer). All of these names have appeared on the covers of several comics over the years. It really is a supergroup of talent and it shows in the quality of each page. I would recommend the work of each one of these artists individually. To have them all together on the same project, makes it a must-have. 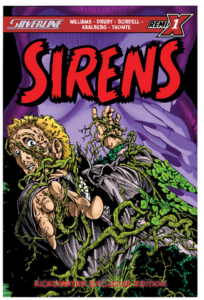 If you’ve never backed a Silverline Kickstarter, let me break it down in crayons. Both books are finished. You’re not backing some idea in development or a promise that at some point we’ll make the book. We’re not those guys. Each pledge is a form of pre-order. When you select a pledge tier (digital, physical, retailer, or Completist) you are preordering that item. What Kickstarter allows us to do is conveniently package and track extra goodies for everyone who wants to order before it goes to our online storefront. We can add in stretch goals for additional rewards, or you can order extra add-ons without having to hunt them down and add them to your cart. 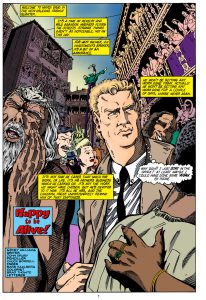 Shortly after the Kickstarter campaign we get the books from the printer and start shipping. Around that time you’ll get an email asking to confirm your details. Make sure you check your email and complete this survey. Otherwise we may not be able to get your order to you or your name may be incorrect in the thank you page. That’s right, if you preorder, your name gets immortalized in the actual book.

We’re already halfway to our first stretch goal, some really sick bookmarks. Honestly these designs are great. And of course the Wolf Hunter book mark is impeccably British. Who knows what we might add for the next level or two of stretch goals. I’m not not saying that a haunted house tour with Dean, Tommy, and myself is a possibility. 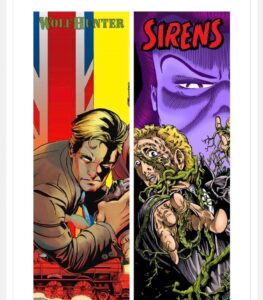 Make sure to check out the Kickstarter for Wolf Hunter #1 and Sirens #1 Remix. We’re already funded so each additional backer just gets everyone one-step closer to some additional goodies.

Be good out there!