After last week’s stream, it was determined that Silverline Comics needed more than just a Facebook “page,” it needed a Facebook “Group,” so all interested parties would have greater opportunity for interaction with readers, fans, and creators. Thus, the Silverline Group page is here: https://www.facebook.com/groups/1065603887155592/. Please go join and chat with us there! 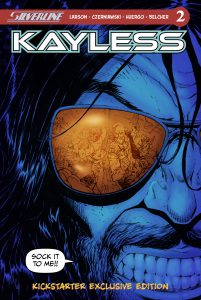 Thanks to all who helped bring Kayless #2 to life! We’re simply waiting on the funds from kickstarter, then we’ll get it printed and shipped! As a reminder, remember, it’s done! And we can’t wait for you to see it!

Most of us are living under quarantine in this Covid World. It’s just flat strange. That does give a lot of folks more time to read, and it gives many of the Silverline creators more time to MAKE AWESOME COMIC BOOKS FOR YOU! Stay safe!

Tune in to Silverline Live stream 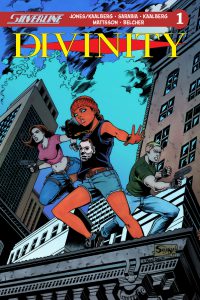 Whether it’s just timing and strange luck, SILVERLINE LIVE started about the same time as the quarantine orders began. Tomorrow will be our fifth straight week. Just to let you know some of what we’ve been talking about:

You have 3 options to watch us live:

Whatever your viewing choice is, please considering liking, subscribing, following, etc…and sharing! Come watch us live if you can—ask us some tough questions!

Comic Chat Authority head honcho, Cody Johnson asked Roland if there would be any interest in a Silverline month. Dedicated followers here might remember that CCA gave Silverline a pretty good review not long ago (https://youtu.be/d7VGh8AIfR8) sparking their interest in talking with a bunch of us. SO, Silverline month start this coming Saturday! 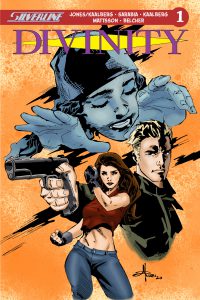 May will see the kickstarter for Divinity #1 and Twilight Grimm #1. Divinity is created, inked, and co-written by Barb Kaalberg, co-written by R.A. Jones, penciled by Alex Sarabia (this guy is going to be hot—you heard it here first!), and colored by Steve Mattsson.

Twilight Grimm #1 is written by R.A. Jones, penciled and inked by Rob Davis, with colors by Mickey Clausen! It’s veteran comic writer R.A.’s return to comics after several years. R.A. has been writing several novels—you should check them out! Fans of his Protectors work will read some familiar names.

July will see the kickstarter for Bloodline one-shot, and Friar Rush #1. It’s the Sidney Williams month as Sid is the writer for both comics. Bloodline is penciled by Rob Sacchetto, inked by Terry Pallot, and colored by Jeremy Kahn. Friar Rush is penciled by Marc Thomas, inked by John Martin, and colored by Rebecca Winslow. Sid’s been cooking up a lot of great rewards for these and we can wait to get the May and July books in your hands!