Hello again, Silverline Family. I had the pleasure of being able to talk with author and comic writer Sidney Williams. In terms of comics, some of his titles include The Mantus Files, Bloodline, Sirens, Marauder, and The Scary Book. In my personal opinion, he is a master in terms of suspense and dark or unsettling themes. He is also one of the most reliable and professional individuals I know. He agreed to contribute a piece about the craft of writing comics. In the following entry, Sidney talks about Captions, how he views their place in comics and how he uses them when writing himself.
-Tim 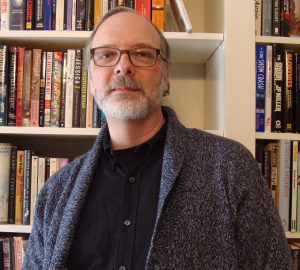 I’d like to say a few words in defense of captions.

Comics, of course, draw on prose fiction. Heavy use of prose narration is characteristic of some early comics. Check a reprint of one of the ‘50s EC Comics (https://www.eccomics.com/history) titles such as Tales from the Crypt, and you’ll find instances of dense text blocks and speech bubbles with characters saying a mouthful.

EC stories were inspired by, or culled from, pulp magazines, so that’s possibly one culprit. Ray Bradbury wound up adapting his own stories for them, often preserving the narrative voice of the source material in pieces like “The October Game” in Shock Suspense Stories #9. (Link: https://comicvine.gamespot.com/shock-suspenstories-9/4000-517/)

You don’t even have to look that far back,. As recently as the 1980s and Frank Miller’s run on Daredevil, the captions are almost novelistic.

Over time, narrative prose has given way to more reliance on visual storytelling in comics reflecting perhaps what many filmmakers and theorists consider the ideal, where speech and images convey the story with no intrusive narration. But in the ‘80s you’d get passages like:

“He feels the cut of the October wind hears the dull throb of New York City below him. He wonders when the city started making him sick.” — Daredevil #226, January, 1986. Story by Denny O’Neil & Frank Miller
(Link for Marvel Database on issue: https://www.marvel.com/comics/issue/8214/daredevil_1964_226)

That certainly gives us a look into a Matt Murdock’s soul.

I’m not saying comics script writers need to be Charles Dickens or Bradbury or even ‘80s Miller.

I would suggest that comics, while they’re a visual medium, aren’t film. They’re of the printed page. They afford some tools not available to filmmakers. The right use of those tools help make the comic book and graphic novel world more dynamic and enriching.

So what’s the rule of thumb for captions? In a word, judicious. In an expansion on that thought:

1. Captions should be used to expand or enrich the reader’s experience, never as a crutch for the writer.

If you just need to tell us it’s Los Angeles, “Caption: Los Angeles” will do.

Maybe a few more thoughts in black and white are in order to stimulate conversation and the creative imagination.

2. If we can see it, you don’t need to tell us what we see.
That’s the big duh of comics writing, but sometimes if you don’t print things outright in black and white text, people don’t pay attention. If we can see a hero approaching a vampire’s crypt, opening the coffin and positioning a stake over the heart, don’t tell us: He positions the stake over the vampire’s heart.

If you use a caption for a scene like that…. [Note from the editor: I will cut that caption SO FAST]

3. Make sure a caption provides insight into character, the hero’s soul, spirit or philosophy.
That’s not an excuse to go full Kierkegaard, but if it tells us something more than we can see like that Miller passage above, the reader’s invited to think, not just look on.

Caption: He hesitates as the stake’s whittled point rests against flesh.

Caption: Is this a life he is about to end?
Or something different?

Caption: What should the act of terminating the undead be called?

Gives us a little more than:

4. Captions should fit the world established in the comic book or graphic novel.

You might not want to get heavy-handed with captions. When can they be used artistically? In something like Image’s Fatale from 2012, the comic’s world is inspired by film noir, where voiceover narration was used to carry some of the flavor of the first-person crime novels of Raymond Chandler or James M. Cain that helped give birth to the noir style. You’ll find far more effective captions in evidence in Fatale or in something like Frank Miller’s similarly noir-inspired Sin City, which started in 1991.

When the concept was fairly new, you’d get a tiny little mug shot of the character inside the caption box, and the text would be in quotation marks. The convention’s familiar enough that that’s not needed any longer, though sometimes we get cues such as the caption being the color identified with the character. John Constantine’s first person captions match his raincoat in Justice League Dark, for example.

Just apply all of the judicious thought to first person as you do any captions. Do they help the story? Add something to character or thematic texture without getting heavy handed? Then deploy.

Those are just a few thoughts. Nothing’s set in stone nor a replacement for your own careful observation or environmental scanning as you read the comics you enjoy. Don’t just read. Take note.

Creators went on with their work. 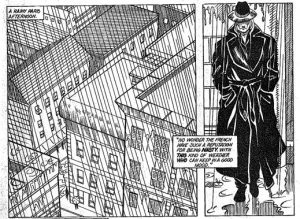 My way-back Silverline title, the noir-inspired Marauder, used a bit of first person narration. Note quotation marks were still the convention in those days.