Friar Rush is known today from legends recounted in 15th Century verse. Those legends identified him as an incarnation of the Devil who turned up at monasteries and priories in disguise to taunt and tempt men and women of the cloth.

His dark pranks and twisted deeds were whispered throughout the middle ages alongside deal-with-the-Devil tales like Faust.

But what if he arrived in the modern world?

Learn more through the eyes of reporter Jake McGlover.

When his old friend from seminary is done in under mysterious circumstances in the New Orleans French Quarter, McGlover undertakes an investigation of his own and finds himself on the trail of the devilish trickster. He soon learns Friar Rush has a new plan to wreak unholy havoc.

Stumbling into the path of a young novice whose betrayal by Rush gave her immortality at a dark cost, McGlover realizes a rock-star style evangelist is the perfect tool for a modern-era game that could lead to death and devastation.

It’s a battle against a twisted imagination with a sinister sense of humor that could destroy a city and much more. 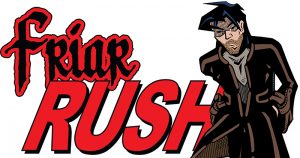