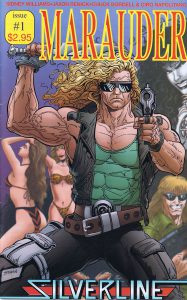 Some say there’s honor among thieves and some say that when they put one of yours in the hospital, you put two of theirs in the morgue. Both phrases were probably said at some time by the Kirk Connell, the hero of Marauder.

Marauder marks a change in tone for Silverline veteran Sidney Williams. This title is a true high octane action-adventure book from the master of horror. Marauder comes complete with gunfights, knife-fights, judo-flips, a rocket launcher, and heavily armed spy boats. During this escapade, William takes the reader across the Atlantic from New York to Paris as one man’s quest for justice pits him against a shadowy band of mercenaries. 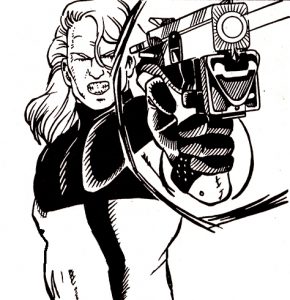 We start this quest in New York during your typical diamond heist. A stone precious beyond cost in a heavily guarded museum display case. Two men tasked by the Thieve’s Guild with the diamonds capture. Those two men are Kirk and his mentor Lumley. Of course, it can’t go all according to plan.

Their heist is quickly crashed by a band of heavily armed mercenaries gunning for the same diamond. Whereas the Thieve’s went in with stealth in mind, the mercs are more of the smash-and-grab type. A firefight breaks out and Lumley goes down. Kirk tries to fight back but the mercs brought a rocket launcher and send Kirk running for cover, leaving the diamond behind. The leader of the mercenaries hits Kirk with a marker round but leaves to recover his compatriot, assumed dead. 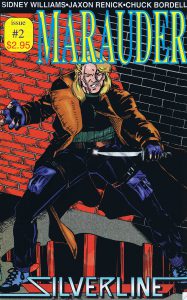 Kirk returns to the Thieve’s guild and seeks their blessing in hunting down the gunmen. He does not receive it but decides to pursue them anyway. He is forced to leave the guild and fend for himself in his new venture with Lumley disabled.

The leader of the assault team, a man named Elapse turns over the diamond to Judas Rathbone also known as the Vulture. Judas runs this mercenary outfit and has put together a new plan, they just needed the diamond to finance it. He tasks Elapse now with capturing Jasmine Stowe, one of the world’s leading financial experts. With her working for the Vulture, he can hold the world’s markets hostage.

Meanwhile, Kirk takes Lumley to a specialized medical facility in hopes of saving his life. The situation is dire, but Kirk is desperate. As it turns out, Kirk made the right call. Lumley pulls through but without the use of his legs. 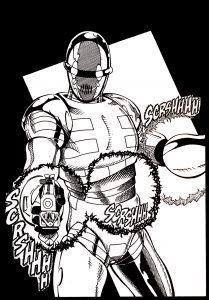 Across the world in the French Riviera, Elapse and another merc known as Chasm find Jasmine Stowe on vacation with a friend and take them both. The countdown is set until Jasmine breaks under their torture and helps them manipulate the world’s markets. It’s up to Kirk to get there in time and dish out justice with the help of Lumley.

Marauder is a classic action-adventure story. With a globe-trotting hero, a conspiracy bent on world domination and a powerful 80’s-action-star-mullet, what’s not to love? This story will have something in it for any sort of action fan with elements pulling from shoot-em-up movies, to international intrigue, and high-tech gadgets.

What really makes Marauder it’s own is its ability to pull on classic tropes without falling into cliche or the pitfalls common in the genre. Perhaps the prevalent example of this is its avoidance of a romance sub-plot. Jasmine turns out to be just as much a hero as Kirk. Their stories happen in parallel but they don’t intersect until the very end. Each character operates in more than one dimension, caring about the bigger issue at hand but also trying to take care of their existing friendships but Williams takes care to not muddy the water with forced romance that could undermine the stakes each character faces. 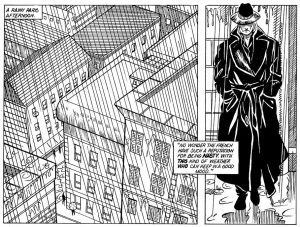 You can also see that in how the story avoids another common pitfall of action stories. That issue being action-leading-to-action. This is what happens where the story just feels like one prolonged fight as the story is driven only by encounters with little room for character. Each issue has its fair share of fights and chases, but there is a lot of time spent on each character working to achieve their goals or even just existing outside of combat. This does a lot to add to the pacing of the story as well as make the characters all feel that much more real.

Marauder is a definite must-read for fans of action-adventure stories that want something that knows what works and what’s familiar but doesn’t let the formula dictate how the story is told. 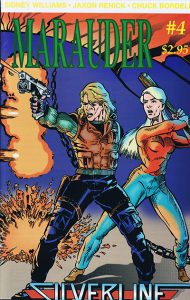 Marauder was created and written by Sidney Williams. A Silverline vet who is known for his work on Mantus Files, Bloodline, Friar Rush, and many others. Williams is also an accomplished novelist with many titles under his belt.

The art was penciled by Jaxon Renick who is known by Silverline readers for his work on Silverstorm Volume 2 and the upcoming White Devil.

That same art was inked by Chuck Bordell who also inked Silverstorm Volume 2, Sirens, Switchblade, and the upcoming White Devil.

The lettering was done by Brad Thomte, Debbie Woods, and Larry Rains.

Marauder is currently being colored by Rebecca Winslow with plans to be re-released in the future in full color.