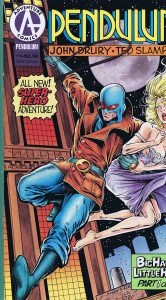 From a small, coastal village in New England to the sprawling metropolis of New York comes Dr. Hildy Row, also known as the Pendulum. This four-issue story titled Big Hand, Little Hand follows Dr. Row’s spiritual degradation as it runs in tandem with his ascent into being a masked hero.

Pendulum is a different take on the idea of a superhero comic. More reluctant than a hero, Dr. Hildy Row tells a lot of the story through narration and reflection a reader would find reminiscent of a hard-boiled noir tale. This narration comes directly from his journal which has been recovered and transcribed post-mortem.

From his journal, we learn a lot about Dr. Row and the many ways in which life has become both tragic and extraordinary. In his own words, he is an “Unqualified Genius,” having earned a doctorate at a young age and being the only man to come close to cracking the code for immortality, despite a history of violence and social ineptitude. His dearest friend and mentor Frederick DeLaCroix, founder of Tougher Technologies, Inc., set Row up with a grant that fully provided for an isolationist lifestyle with a simple agreement. Every year, Row turns in his notes, as disorganized as they may be, then the company turns them into marketable products. No questions asked on either side. Yet at the same time, he has developed a literal death wish. 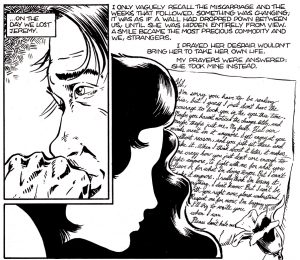 Issue 1 brings us into Dr. Row’s story after his friend and mentor, Frederick DeLaCroix’s passing. He and his wife Lucy were expecting a child, who they, unfortunately, lost in a miscarriage. The rift this caused in their relationship was so great that Lucy had to leave. Dr. Row is left alone in his home in a small ocean side village in New England. Where he remains in bed for the following three days. His sister and brother long since estranged, Hildy Row now finds himself without friends or family. His entire world has collapsed around him.

Eventually, Row emerges from his self-imposed isolation and returns to his laboratory. There he completes his work on a serum that could offer immortality. A serum he began working on as a promise he made long ago. Yet, when he decides to test it on himself, he hopes the serum fails. The result being his death. To his disappointment, he awakens, very much alive. Row walks through the park side of an inlet that he frequents to think about his current reality and what went wrong. 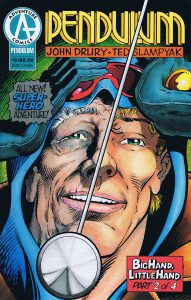 Through an unfortunate chain of events, the inlet is set ablaze and a boy is trapped on a jetty by the flame. Almost unconsciously, Row runs headfirst in the flame and emerges with the youth untouched by the roaring fire. Only there is no pride or sense of dignity in the actions he took that day. He knows the real reason he attempted to save that boy was in hopes that the flame would consume him.

Row returns home to wallow in his shame and the public’s new perception of him. The adoration that he feels is misplaced reminds of the way people look up to caped superheroes. Then and there he commits himself to become one of these heroes. Daily, there are confronted with life or death situations. He hopes that one of those days, the villains will catch up to him. Granting him a death that he feels would free of shame. However, a new problem arises in the form of a PARA attack. A side effect of the serum, paroxysmal atemporally rapid aging, causes him to age and de-age several years in a matter of seconds. 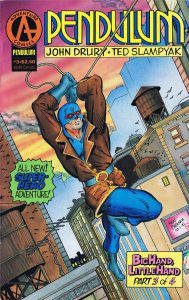 With a mission ahead of him and the curse of his immortality serum handicapping him, Row begins on a mission that will bring him into direct conflict with an executive at his benefactor’s company, and a member of the scientific community that he idolizes.

More than just another superhero comic, Pendulum is the story of how one man’s tragedy brings him to do the extraordinary, even if for the wrong reasons initially. The unique style of narration allows the reader to connect with Dr. Row in a way we can’t with many comic book characters. He takes the reader on an emotional roller coaster as he, himself, works to understand why he wishes for the end. Row goes through a complicated metamorphosis as he realizes that he may not need to die, but rather that he only needs to kill part of himself so that the rest of him may continue living.

This is the kind of story that flips the superhero genre on its head. The tale is an interwoven web of family trauma, corporate intrigue and espionage, complex emotional growth, and deadly dealings with one’s idols. With a rich and deep narrative delivered both in art and prose, it feels like a reader could just as easily be reading a classic noir thriller novel as much as a “cape-comic.”

Creator, writer, and penciler John Drury also gives the reader a little peek behind the curtain of his mind with each chapter in the story of Pendulum. At the top of each issue, Drury talks about the unique aspects of that respective issue’s creative process and how that translated into bringing Dr. Row’s story to life. John also worked on Silverline’s Sirens as a penciler, and Cat & Mouse as an inker. 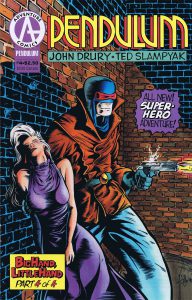 Pendulum was inked and lettered by Ted Slampyak who also worked on Neil Gaiman’s Mr. Hero – The Newmatic Man as a penciler and cover artist. Slampyak also worked as the writer and artist for Annie in 2013.

Pendulum also featured letters by Debbie Woods in issues 3 & 4, who has also worked on Cat & Mouse.

Covers were done by Steven Butler and Ken Branch for issue 1; Ken Branch on issue #2 and #3; John Drury and Thomas Florimonte on issue #4. Tom O’Connor provided the colors for all covers. Steven Butler has also worked as the penciler on X – Men Legion – Shadow King Rising , Sonic the Hedgehog, Silver Sable, and as a cover artist on Lady Death. Ken Branch has also worked on 28 Days Later as penciler. Ken also inked titles such as Cat & Mouse, Green Lantern: Kyle Rayner and Iron Fist: The Book of Changes. Thomas Florimonte has inked Cat & Mouse and other titles, and is the creative force behind Zomboy.