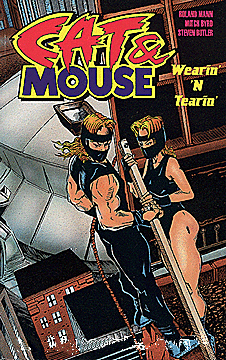 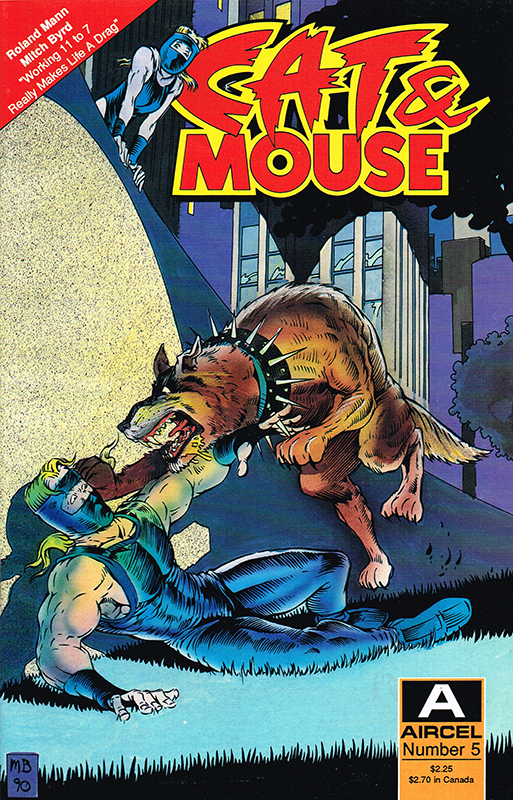 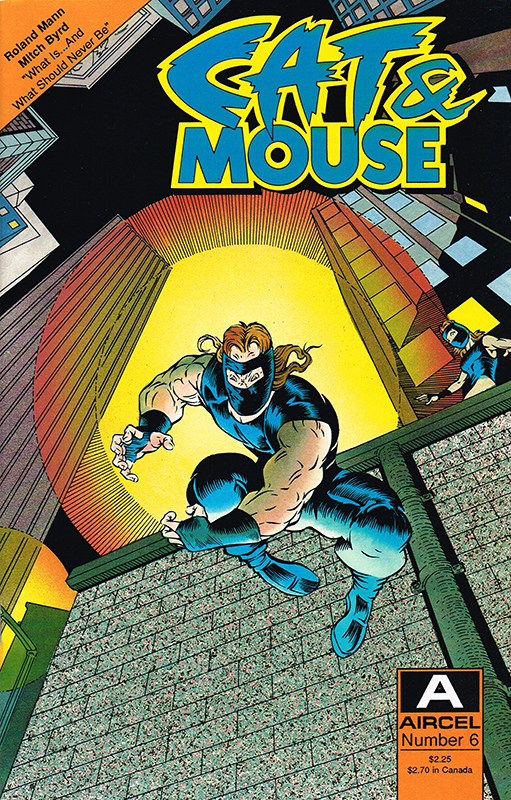 Whereas the premiere Cat & Mouse volume established the world of the Silverline Universe and some of its premier denizens, these subsequent four issues (issues five through eight) allowed the creative team to further explore the motivations of Jerry O’Neil, deepen the Mafia / Yakuza conflict that is central to this title, introduce new characters (some that will be around for multiple story arcs to come while others that served a very short . . . and final . . . purpose), and provided opportunities galore for our duo to partake in action each and every issue – and often against antagonists who are also battling each other!

“Wearin’ and Tearin’ ” continued to beautifully showcase the series’ ability to retain humour throughout, such as Demon’s surprising reveal to Nancy – his Gal Friday at his veterinary clinic – that he can now wear pants (in light of the climactic action scene in Cat & Mouse issue 4) and Demon’s subsequent locking himself in a cage – in his own veterinary clinic – when an overzealous police officer makes a surprise visit at Dr. Grayson’s clinic.  He did not make a very convincing canine, but enough to throw the officer off of his trail. ?

Demon’s appearances in this arc are limited, especially compared to a central role he played in the first Cat & Mouse story arc, but not all of his appearances were whimsical as those described above.  In fact, some of the most disturbing portions of this story arc include the first appearance of a mysterious cult – one which displays inverted crosses on their religious regalia, performs human sacrifices including the action of removing the heart from the victim’s body – and has a mysterious connection to our favourite fur-covered veterinarian.  In fact, the cult’s lair has a shadowy outline of their “master” on wall behind the sacrificial alter, references “the three tails”, and, as of this story arc, believes that their “master” has — literally — sent them a piece of himself.  Demon, uncharacteristically VERY angry, is on the trail of this cult, which begins the foundation for Demon’s own four-issue limited Silverline series, Demon’s Tails! (Demon’s Tails, his solo mini-series, is currently available in collected Trade Paperback Graphic Novel format from Silverline- order yours today! Shameless plug!) 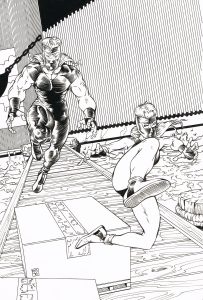 Throughout this four-issue story arc, writer Roland Mann deepened the crime dynamic of the title providing the framework that both the Mafia and the Yakuza (the Japanese Mafia) have in the lives of Cat, Mouse, and Jerry O’Neil (Cat’s civilian identity.)  Corruption is key in New Orleans and the readers begin to have the depth of which the local police department is connected to the Mafia powerhouses of the city revealed to them.  Some corrupt officers who are happy to partake in extracurricular activities for the Mafia are introduced as are characters who now have second thoughts regarding this double-agent allegiances and feel guilty about these poor choices.  Several lists of officers “on the take” are floating around New Orleans , in the possession of dueling factions. One such list can be used as evidence in court against those who swore to serve and protect the citizens – not their criminal bosses – while another list of police officers on the Mafia’s payroll proved to be utilized for far more sinister purposes . . .

Throughout Wearin’ and Tearin’, Mouse – Mandy – notices that there has been a dramatic change in the demeanor of her partner.  Internal thoughts that Mouse shares with the reader, through thought balloons, include, “…(he) seems so careless. It’s not like Cat;” , “Something’s wrong with Cat tonight;” among others.  These internal thoughts illustrate her concern about her partner’s mental well-being, while Cat’s uncharacteristic actions such as yelling “Let’s do it!” while jumping into a fray without a plan, coupled with his 180-degree change on keeping Mouse out of seeing action and keeping her out of harm’s way, also give the reader insight that Cat has some demons of his own (yes, pun intended) that he is dealing with.

Cat – Jerry – discusses his thoughts about rejoining the police force with Mandy, as that may give them opportunities to obtain inside information that can be used to further their own interests (including paying rent!) and to clear their names with the authorities, who have, to this point, used Cat and Mouse as scapegoats for their own illegal actions.   Mandy – Mouse, already concerned about the change she’s seen in his personality, encourages him to do so.

Martin Rossman – the man who was hired for the department’s Detective position over a much more qualified and “next in line” Jerry O’Neill – rehires Jerry as an officer after reviewing his file and wondering why he never heard of Jerry before. Jerry immediately benefits from his re-established position within law enforcement when he overhears a private conversation that reveled information that put some pieces of the current puzzle together.  His decision to work against the system – from within the system – immediately paid off.

(One point of visual interest to be noted here is the remarkable similarity between Silverline’s Martin Rossman and actor Gary Oldman’s portrayal of a very well-known Police Commissioner in a very well-known cape and cowl movie trilogy – that was filmed decades later!! ? )

Wearin’ and Tearin’ featured not only strong plot and characterization but action, action, action galore!  From multiple heist scenes (against the Mafia AND the Yakuza) to plenty of fisticuffs, from bullets flying to grenades exploding, from beheadings to sword-inflicted deaths, from accusations to assassinations, a magical sense of action and adventure was still fostered and ingrained throughout the series.  Writer Roland Mann was masterful in keeping the title fun even when subject matter was dark.  And there were some dark, dark times . . .

This story arc also served as the protracted introduction of a duo that will play a much larger, pivotal role, in the future of the series.  Threaded throughout the four issues, references to “specialized” Yakuza-associates who predated Cat and Mouse foreshadowed future characters – and conflicts.  Phrases such as “Before them (Cat & Mouse) there were two others” and “The other two. They’re actually more brutal than Cat and Mouse.”

Brutal this mysterious duo is indeed, as they wander throughout New Orleans following a list, addressing officers by name before asking if they are on the Mafia payroll . . . before ending the life of each officer on the list.  This duo scratches names off the list one by one while bickering all throughout about who killed the last one and who gets to kill the next one . . .

Cat and Mouse are now in possession of a pair of items – a ledger and, now, a computer disc.  Between the two items, they hold the fate of many in their hands.  What will become of this revelation?  That, my dear friends, is to be continued . . . 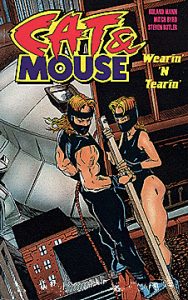 Roland Mann, series writer and Silverline Editorial Director, would, later in his career, become writer, editor and eventually Managing Editor at Malibu Comics.  He has been the driving force of Silverline as a publisher, including the current relaunch of the brand!

Mitch Byrd, series artist, would, later in his career, grace multiple Malibu comics with his artwork as well as provide artwork for myriad publishers on a plethora of titles.  Mitch held a notable run on the Green Lantern character “Guy Gardner: Warrior” title.

A fantastic lineup of inkers provided their services to this installment of the Cat and Mouse series.  They include Roland Paris, John Drury, Karl Story, Brian Dale, Nick Centanni, and Floyd Robinson Jr.