The synopsis printed of the back cover of “The Cat & Mouse Collection”, this titles’ first compilation graphic novel, succinctly began with the following quote: “Jerry was a cop. Mandy was a crook.”

This statement was short, brief, accurate, and immediately provided the reader insight into the foundations of the series’ two main characters. However, both Jerry and Mandy, as well as the very “Cat & Mouse” comic itself, would quickly evolve far past that base introduction into something much more intricate and even more compelling . . .

As Silverline’s first, and longest-running, title, “Cat & Mouse” established itself as the cornerstone of a growing Silverline Universe.  “The Cat & Mouse Collection” bundled the first four issues in the series (though FIVE issues worth of pages due to a double-sized first issue!!) into one easy-to-read volume.  The Collection chronicles the lives of our titular duo – Cat (police officer Jerry (Jared) O’Neil) and Mouse (crook and reform school inmate Amanda (Mandy) Paige) and also establishes the world in which their adventures take place. 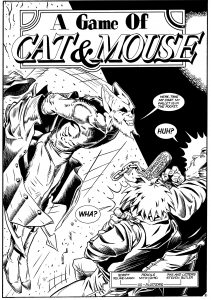 Eschewing formulaic first issue introductions, neither Cat nor Mouse were featured in the title’s opening segment.  That honour went to Dr. Keith Grayson, who would assume the name of Demon in this very opening sequence and, through a series of events, became cemented as one of the most important – if not the most important – supporting cast member.  Dr. Grayson served in many capacities throughout this series,  which helped establish him as a key linchpin to the entirety of the Silverline Universe.  Both the reader and Dr. Grayson are introduced to our title characters, and are brought up to date on their story, together.  Dr. Grayson’s – Demon’s – first encounter with Cat and Mouse occurs as our duo are midway through an adventure of their own and find themselves in desperate need of assistance.  Would Dr. Grayson answer the call? 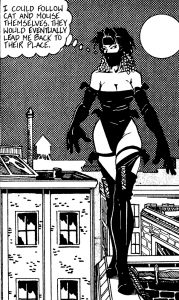 Meanwhile, a mysterious martial artist, later revealed to be named Kunoichi, stalks our main duo for the better part of this story arc – but why?  Is she friend or foe?  Or something all together in-between? After a series of breaking and enterings to gather intel on Jerry and Mandy, Kunoichi locates and infiltrates their apartment, lying in wait for their return.  Demon uncovers Kunoichi’s plan to (possibly) ambush his friends, leading him to rush to their domicile to warn our duo . . . especially one of them.  An epic battle between Kunoichi and Demon ensues, relationships and intentions are revealed, and Demon is left . . . altered . . . from this encounter.

The first “Cat & Mouse” story arc also, very subtly, introduces a character who would become deserving of his own title (one day!!) and who would serve as the role model for many others in the growing Silverline Universe of characters. This character reveal also serves to expand the scope of the title – and therefore the Silverline Universe itself – past the confines of New Orleans and well into the metropolis known as Chicago. 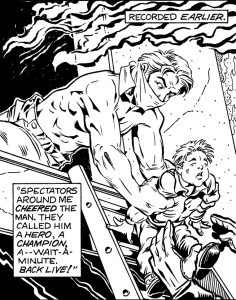 The adventures Cat and Mouse undertake in this first collected edition span multiple genres and themes including crime, martial arts, vigilantism, the advent of masked heroes, and yes, even romance. However, romance does not always have to spark between the two main characters of a title . . .

“Cat & Mouse” is an action packed series that focuses on establishing and developing fun characters, utilizing witty dialogue, and integrating some of the best sound effects to ever grace the pages of a comic book.  The series never shys away from delving into deep topics such as police corruption, worries about public acceptance for being “different”, and evolving roles from adversaries to reluctant partners to caregiver and patient.  It also expertly explores themes of trust, loyalty, honor, mentorship, progeny, redemption, and legacy.

The team behind the creation of “Cat & Mouse”, the series, is impressive to say the least.  Three previously unpublished creators united to create this wonderful series.

Roland Mann, series writer and Silverline Editorial Director, would, later in his career, become writer, editor and eventually Managing Editor at Malibu Comics.  He has been the driving force of Silverline as a publisher, including the current relaunch of the brand!

Mitch Byrd, series artist, would, later in his career, grace multiple Malibu comics with his artwork as well as provide artwork for myriad publishers on a plethora of titles.  Mitch held a notable run on the Green Lantern character “Guy Gardner: Warrior” title.

Steven Butler, inker and Silverline Art Director, served as penciller on Silverline’s second title, “SilverStorm” and would go on to produce work for Malibu, Marvel, and Archie, to name a few publishers. Mr. Butler was able to showcase his range of artistic skills while illustrating characters as diverse as The Badger to Sonic the Hedgehog and holding notable runs on Marvel’s “Silver Sable” and “Web of Spider-Man”.

Also providing inking skills to this first collection was Roland Paris, who later went on to ink many titles at Marvel Comics.

On the cover of “Cat & Mouse” #1 features the following quote from Steve Englehart (noted and celebrated comic book veteran): “Talk about your one-two punch! Fun characters, fun art! This is what every new comic ought to be!” Mr. Englehart was right, of course. He was so very right!! If you have not yet read the original “Cat & Mouse” collection yet, what are you waiting for? ?