If sequential storytelling is the invisible art, then comic book lettering is an invisible-invisible art, viewable only through the MacGyver-esque day-saving bomb-thwarting tinkering involving lemon juice and a lighter.

For many fans, the “what” of comic book lettering is limited to the placing of dialogue, captions, and word balloons on the comic book page. However, in reality, it is so much more than that. For instance, it also involves placing sound effects.

Lettering is an art form in itself that requires not only a keen design eye but also a mastery of the language of comics. Letterers must view a comic book page as a whole, choosing where to place those word balloons and captions in order to successfully lead the reader’s eye across the page from the first panel to the last.

Think for a moment about the last comic you read. Did you have trouble knowing which word balloon to read next? If not, then you were blessed with professional comic book lettering. If you were lost on the page and had to take a wild guess, then you were a victim of amateur work.

In fact, a comic book can have PEN/Faulker-worthy writing and the most imaginative, beautiful art since Kirby, but it can quickly be destroyed by shoddy, unprofessional lettering.

Once all dialogue and captions are on the page the letterer is also responsible for adding in the sound effects that will breathe life into the title’s action sequences.

This doesn’t simply block letters thrown onto the page—oh no!—a letterer must ensure the sound effect sits appropriately with the art and visually represents the actual sound. The punch to the gut of the protagonist’s enemy might be called out as “Whud” in the script, but no matter the variation (thud, fwump, whumph, fud, tup, et al), the letterer must represent this hit so the reader both feels it and hears the sound in their mind’s eye.

This is known as onomatopoeia (which only took me six attempts to spell correctly) and indicates a word that phonetically imitates, resembles, or suggests the sound that it describes.

These sound effects provide a soundtrack to the book and allow a letterer to show their creativity. Most letterers develop their own “signature” style for sound effects, using it as a way to differentiate themselves. After all, word balloons and caption boxes generally all look the same, and sound effects are crucial to adding a dash of fun to the letterer’s workload.

Next time you read a comic, ask yourself: “How was the lettering?” if you can’t think of anything negative, then you were treated to the best that the industry has to offer. And often, having nothing negative to say is the biggest compliment one can give a pro letterer.

It’s my hope that this brief overview provides you with a bit more information and understanding when it comes to the role and responsibilities of a comic book letterer. Perhaps you’ll even gain a bit of respect for the work once you’ve closed the back cover on your issue. Though it’s more likely, you’ll probably think, “Oh, yeah, someone placed the dialogues, captions, and word balloons on the comic book page. Neat.” 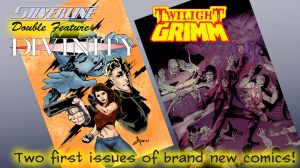 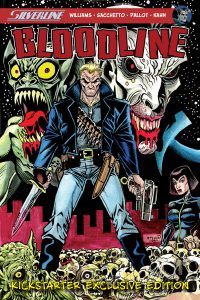