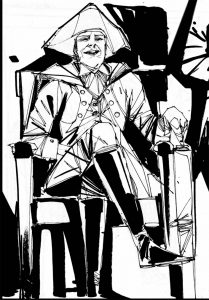 The independent comic publisher behind Cat & Mouse, Kayless, Demon’s Tails, and others add steam, clouds of black smoke, muskets, boiler carriages, and founding fathers to their lineup with Steam Patriots, co-created by Scott Wakefield and Rory Boyle; penciled by David Mims; and colored and lettered by Daniel Hosek.

Scott Wakefield says, “Steam Patriots has been years in the works, slowly evolving into a comic book, which is perfect, because it’s a visual story with a great big dose of action.” Wakefield and his good friend Boyle came up with the story idea while serving together in the Coast Guard. “We love the Victorian style of traditional steampunk,” Wakefield continued, “but someone needed to tell a story about its beginnings. America and Ben Franklin seemed like a good place to start things off. We’ve been molding this story from that small kernel, and now it’s ready for the world to see.”

“Rory and Scott told me about the amazing characters and expansive story-world they created,” says Roland Mann, Silverline’s Editor-in-Chief, “and I knew that combining the art of David Mims would be a wonderful addition to the Silverline family. They put enormous effort into developing a complete story, and building a creative team, so we’re excited to get their story into readers’ hands.”

Steam Patriots is a steampunk origin story set during the American Revolution. Ben Franklin has changed the world with his steam creations, and he has set his efforts toward throwing off the tyranny of England’s rule. The story begins in August 1776, where young Felix Ward-a boy of 15, with a mind like no other-discovers stolen plans for Franklin’s electrical weapon. Beset by redcoats, and he must use his mind and wits to save Washington’s army from destruction.