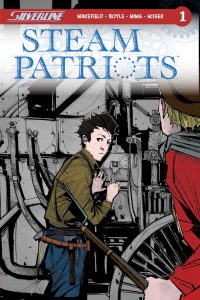 Steam Patriots is the story of Felix Ward,  a young colonial Mechanician’s Apprentice with an unmatched memory for details set in the American Revolution.
As British troops storm ashore, Felix discovers information that could change the balance of  power in America’s war for independence. The  entire world changed when Ben Franklin refined the steam engine and  ushered in a technological revolution. Now Felix’s world is thrown  upside down as he’s swept into war and must evade the British  juggernaut to help the cause for freedom.
Steam Patriots is created by Scott Wakefield and Rory Boyle