Hey everyone! We’re back again for another double feature kickstarter as we bring you Bloodline one-shot, and Friar Rush #1 (of 3). Let me be quick to state upfront, that like all previous (and future!) Silverline kickstarters, both of these comics are FINISHED. We just need you to help us get the funds to print and ship them.

Both projects date back to Silverline 2.0 (the late 90s). Bloodline was completely finished (in black and white) and Friar Rush was penciled. Unfortunately, the industry crash that affected so many, also caused Silverline to cease production. The art was sent to writer Sid Williams with the idea that he might decide to do something with them later. Fast forward to last year when Silverline relaunched and I reached out to Sid to find out if he still had the art for both projects. He did. So we found Jeremy Kahn to add colors to Bloodline (penciled by Rob Sacchetto with inks by Terry Pallot), and we got John Martin to ink Aaron Humphres pencils on Friar Rush, while Rebecca Winslow added color…and we’re quick to say that BOTH comics look fantastic!

Like the last kickstarter, the primary kickstarter version is a flip book. The kickstarter covers are by Steven Butler (Bloodline); Aaron Humphres and Rebecca Winslow (Friar Rush #1). Every single page of original art (in some state) is available—that’s a LOT of original art! At the encouragement of several of you, we added a “variant cover” for both books. The variant for Bloodline is done by Cat & Mouse penciller Alex Gallimore, and the variant for Friar Rush #1 is done by John Martin and Mickey Clausen. 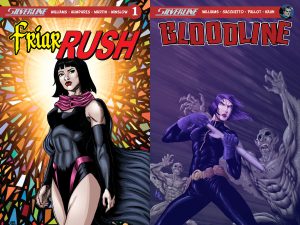 Lots of cool stuff to be had—mostly, it’s comic books, though! So jump on over and check it out.

Also, don’t forget that you can catch Silverline live three times a week: Sundays and Wednesdays feature an assortment of us talking about various comic book things—yes, we’ll take requests!

Monday is a 1on1 where we sit down with a single Silverline creator and just have a chat with them.

And even on Twitch: https://www.twitch.tv/silverlinecomics/

(you can make 60 second clips on Twitch—you should check that out!)

Thanks, as always, for your support. We couldn’t do any of this without you.