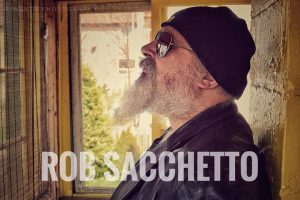 Hi there, Rob Sacchetto here,’just letting you know a little bit about my life as a Zombie/Horror artist. In 2006 I invented an online service in which I hand paint people as the living dead, called Zombie Portraits.. People simply send me a J-peg of themselves or a loved one and I hand illustrate them as zombies using traditional means like paint, pen and ink, with no computer photo-shopping involved. So far I have ‘zombified’ over 5,000 people all over the world! It feels odd to say that I actually invented something, but at that time, no one had ever provided the service I started. Feeling that I wasn’t drawing enough zombies, I started Zombie Daily, a blog where I post a new original zombie drawing or painting every day! This site was started in 2008 and so far there are over 4,000 posts and counting as I still update with new content on a daily basis. The formation of Zombie Daily led the publishing company Ulysses press to offer me two book deals, one for, “The Zombie Handbook: How to Identify the Living Dead and Survive the Coming Zombie Apocalypse”, which has since been translated to Spanish, and titled “Apocolipsis Zombie” and my next book, “Zombiewood : The Celebrity Dead Exposed”. My Zombie Portrait service also caught the attention of noted zombie author Jonathan Maberry, who asked me to create character ‘chase’ card illustrations for that book, his four follow-up Zombie novels, and alternate covers to the IDW comic miniseries based on the first novel. I’m featured in the documentary “Zombiemania” and provided the morphing zombie portrait drawings for me and the other noted zombie experts who were interviewed, including George Romero, Tom Savini, Max Brooks and Greg Nicotero. In 2013 I published my first (crowd funded), graphic novel entitled’ ‘Rob Sacchetto’s Cape Fear,’ a One Hundred and Fifty page fantasy/adventure/horror genre book, and have since been working on its sequels. The second graphic novel in the series is being illustrated right now! My Zombie art has been licensed for use on everything from puzzles to skateboard decks, T shirts, journal covers, comic books and many other products, including a full 56 Zombie card deck for Bicycle playing cards, a deck featuring the many types of ‘Bigfoot’ creatures and Comic book covers and interiors for the Australian Horror Magazine, ‘Decay.’ With both the Zombie Portraits, and the Zombie Daily, sites, I believe that I’ve drawn more zombies than anyone on the planet. Zombie Portraits is still going strong after 14 years, and I still post new Zombie Art every Day! Please feel free to peruse my www.zombiepotraits.com site and thank you so much for your time and consideration.