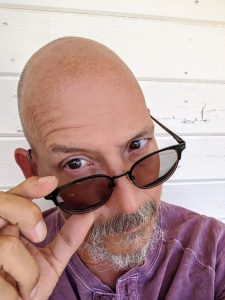 Artist ~ Writer ~ All Around Smartaleck
Born and raised in Oklahoma until moving to a number of other States, Texas, Arizona, Utah, Texas again.
Studied Illustration at the Kansas City Art Institute
Have worked with Marvel Comics, penciling a short story in their Sci-Fi anthology book Open Space (#4).
Next was the mini-series Marauder for Silverline, followed by another mini-series, SilverStorm II for Silverline.
That got me the job with DC Comics on Deathstroke: The Terminator (#’s 37-38)
Also have done illustrations for a number of stories at Revolution SF and writing the short story “Hilltop Manor.”
Currently residing in Arizona (Again!) raising wild lizards to sell to tourists along with hand made turquoise jewelry just outside of Bio-Sphere II.
That’s a lie, I don’t raise the lizards, I just watch them scurry along the patio and desert.
Nor am I hand making jewelry and selling it.
But I had you going there for a second, didn’t I?
Heh heh heh