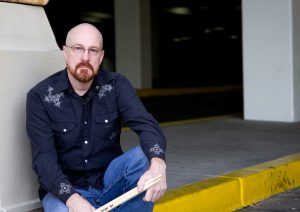 rained as a Graphics Illustrator in the USAF, Brad Thomte has been lettering comics on and off for 25 years. In 1994, he started working
on a small press book from Mockingbird Studios called Tech City: Electronic Gods. This book got him featured in the Dyess AFB newspaper and gave him samples to pitch at conventions.

Roland reached out to Brad on several occasions to letter books for
his comics for Silverline.  Brad and Roland worked together on
Silverline titles Switchblade, Scarybook, Marauder, and Silverstorm.
Roland also got Brad work with Malibu Comics on the Ultraverse titles.