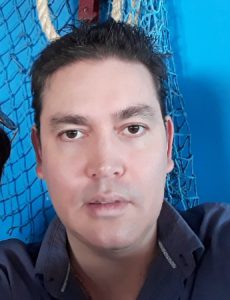 Alex Sarabia started out as a political cartoonist in a local newspaper in his hometown of Chihuahua, Mexico. Later he would work as a graphic designer in a government office where some of his bosses would ask him for oil and pastel portraits of themselves. Alex entered the comic and illustration business in the USA when director J.R. Bookwalter gave him the chance to create the art for the bluray slipcover of “Robot Ninja” as well as the official comic book adaptation of the film. Since then, Alex has done various illustrations for covers and promotional art for horror movies. His first full comic was Leave on the Light from Antartic Press. He joined the Silverline Comics team where he is pencilling Divinity, created by Barbara Kaalberg and co-written by R.A. Jones. He is excited to be part of the Silverline Comics family and anxious for the opportunity to grow as an artist.