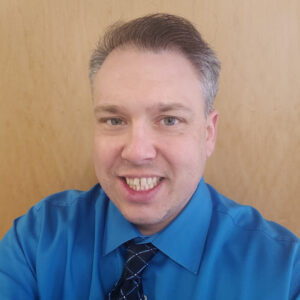 John Metych, with a comic book in his hands, or hidden in his backpack, even in his youngest days, there was no doubt that he would live, breathe, and eat (good source of fiber, right??) monthly illustrated periodicals in some way, shape, form, or fashion.  Heralded, in Junior High, as “Most Likely to Own a Comic Book Store,” Metych went on to work in, and later manage, comic book stores throughout his college years. He was there when Image Comics launched.  He was there the day Superman died. He was there during the Black and White independent comic boom and dreamed of sharing stories of his own one day.  A walking encyclopedia of 80’s and 90’s comic book history, he was also named “Silverline’s Greatest Fan” during their initial run as a comic book packager, working with multiple publishers to expand their brand, titles, and stories.

Now an educational professional during the day, and a shining light in the comic industry at night, John Metych is best known for his highly regarded self-published action / adventure / espionage series – Sniper & Rook.  Publishing under the “Beta 3 Comics” imprint for the last two decades, Metych is in the process of bringing not only Sniper and Rook, but his other illustrious creations as well (yes, including his fan-favourite character, Ripper!) to Silverline Comics!

John is an awesome single dad of one awesome son, two awesome pups, and hails from the not-so-awesome state of Illinois.