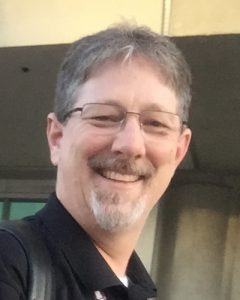 Roland Mann is a writer, editor, speaker, and professor. As writer, he is best known for his work on Cat & Mouse, a comic which ran for nearly two years, garnered critical acclaim, was optioned by Hollywood, and led Roland to other work. Other titles Roland has written include Tiny, Rocket Ranger, Miss Fury, Planet of the Apes, Battletech, Krey and Demon’s Tails. As editor, Roland is best known for his work as a Malibu/Marvel Comics editor where he edited The Protectors line of comics and many Ultraverse titles. Roland also served as Editor and Publisher of Silverline.

In addition to his work in comics, Roland has been a newspaper editor and an advertising flunky. More recently he teaches Creative Writing at the university level. He is also a frequent speaker at writing workshops/conferences where many find his sessions encouraging. Roland’s first novel, Buying Time, was published in 2010. Other recent work includes graphic novel adaptations of the classic novels The Adventures of Huckleberry Finn and The Wonderful Wizard of Oz. Roland can be found on his website www.rolandmann.me where he also occasionally blogs and he is honored when folks “like” his facebook author page at https://www.facebook.com/rolandmannAuthor.