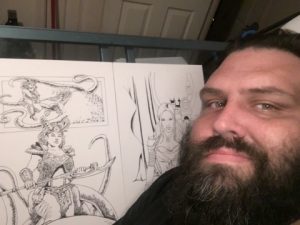 A Memphis native that’s working his way into the industry with taps from Maw productions and Heycat comics to provide inks on projects. He has also slung ink on a short web comic, Box of Oddity, that was on The Buzz Kill magazine. com. Recently published by Antarctic Press where he did some inking in Steam Age Wasteland and inked a short story penciled by Mitch Foust that was in the 901 Anthology by Bad Dog Comics.