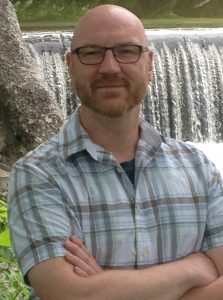 Dan Hosek has always loved drawing and wanted to create comic books from the moment he saw that ratty copy of Marvel’s The Frankenstein Monster #9 laying around his childhood playroom. That dream was realized (sort of) when he worked in Marvel Comics’ editorial department in the mid-90s. At Marvel, Dan fell in love with the collaborative aspect of comic creation (and learned that his skillset was better suited for writing and editing and not so much for pencilling). Luckily, he still gets to flex his artistic side as the colorist and letterer of Steam Patriots for Silverline!