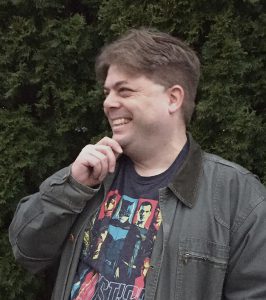 Aaron Humphres grew up in the 80’s and fell in love with Saturday morning cartoons, action figures, and eventually comic books. The comic book that hooked him into a love of the medium was X-men #219. From there it was Masamune Shirow’s Appleseed, Teenage Mutant Ninja Turtles, Alien Legion, and many more. During this time Aaron developed a love for independent comic books such as TMNT, Usagi Yojimbo, and Bone. In fact the weirder and out there the concept was, the more it attracted his attention.