Up this time is Mike W. Belcher, a graphic designer by day and a comic maker by night. Mike provided letters for Scary Book #4, Divinity #1 and #2
Twilight Grimm #1 and #2. Mike is also the creator/writer/artist for Man in the Mask, a comic he does with his son Aiden on color.

I am Mike W. Belcher  I hail from the great state of Kentucky, eastern Kentucky to be exact. Little place called Prestonsburg. Other than when I went off to college, it’s been my lifelong home.

I am the production designer and letterer for some of the fine books at Silverline  I developed the trade dress design overtop the logos of the books to give credit to all the hard working creator. Currently lettering Divinity and Twilight Grimm with more to follow I hope, including my buddy Ron Fortier’s new project, Satin’s Ways, coming soon from Silverline. 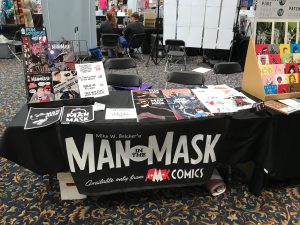 I also self publish and create my own comic under my AMK Comics banner called MAN IN THE MASK. Some have called it a throwback to a more fun time in comics. It’s story of a regular guy trying to live up to the masked legacy of his grandfather. It’s my attempt at trying to do a old fashioned masked man book where the guy is actually a hero to his community for many reasons not just because he can throw a good punch. I think a number of us were, of course, influenced by super hero comics. But the last 20 or so years have been very dark and not very fun. I’m writing a comic that I hope fills a need for something a little more fun and hopeful.

I’m kind of boring. If I’m not creating comics, I’m typically reading them. I do like to cook for my family. That’s one of the many things I learned from my grandfather who I loosely based the grandfather in Man in the Mask on. 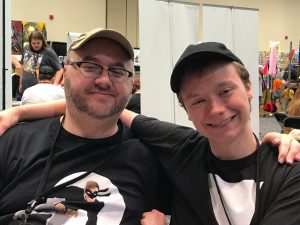 I legitimately love comics. Ever since I discovered them, I have had no other interests. They are a fundamental part of my life. I found that I didn’t just want to write them, I needed to make them too. When I sit down to write or draw, I’m instantly transported to a new world and remember the fun I had when I was younger drawing on my board.

I found myself lucky enough to live through such an imaginative time in comics 1985-86. John Byrne’s Superman and Frank Miller’s Batman Year One made me want to create comics and it just went from there. 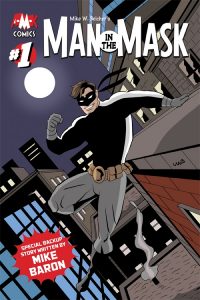 Wide range of bands like Metallica, Pearl Jam, Tom Petty and the Heartbreakers, Huey Lewis and Johnny Cash keep me inspired and I can tailor my list to the type of page I’m drawing. I work in silence when I write though.

I was just learning to digitally letter and it shows, but yeah. 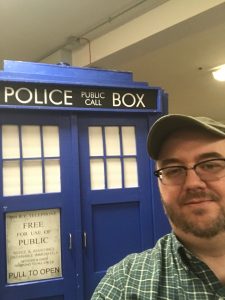 Don’t strive for perfection or that right time of ability. I was very hard on myself and it kept me from fulfilling my need to create comics earlier in life.

Parking lot. I would like to think people could relax and kick back at my lot.