Hello and Happy Holidays Silverline Family! I had the pleasure of asking Tommy Florimonte what I think may be one of the most important questions I’ve asked so far on this series. I asked him how he taught himself the craft of making comic books. This is incredibly important because, for many people, the ability to take a specialized course on making comic books is simply not in the cards. But that shouldn’t count out their passion.

Not only has Tommy been an inker with Silverline, but he is the co-owner of Ka-Blam (a comic printing service), and he has written and sold his own series for children. I would say that as a self-taught comic creator, Tommy is more successful than some classically trained artists and writers. It is my hope that the following entry in our Craft series encourages you to pursue and learn how to make comics if you have the passion regardless of what traditional options lay in front of you.

Teaching Myself The Craft

I’m an inker. So what does that mean? Essentially, my job is to take a drawing that someone else has done and make it print-ready. Yeah. Yeah. Yeah. Can’t you just redraw/trace what the penciler has already drawn out? Sure, you can do that. But the inker’s job is more than that. The inker’s job is to make it better. Inkers are sometimes called embellishers. Embellish means to make something more attractive. Better. The inker should ADD something to the process. To my mind, the goal as “The Inker”  is to do everything possible, using all the inking tricks I have learned, all the skills I have picked up, use all the techniques available (another subject) to make those pencils look Really Cool!…  To make them ROCK!!! 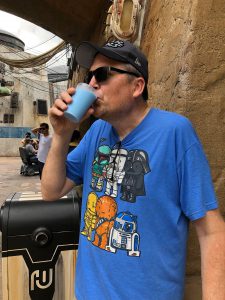 So how do you do that?

I was already finishing college in a subject different from “ART” when I got the bug to try my hand at being a comic artist. While I’ve always been able to draw naturally, not professionally, of course, I had no real “art training” and I certainly didn’t like the idea of adding more “COLLEGE” to take drawing classes. Why would I? I could already draw. How foolish I was. So- What do I do? I needed to find people that were doing what I wanted to accomplish and ask lots and lots of questions.

Well, luckily for me, I had a few friends doing just that: Starting their comic careers. So the answer to “What do you do?”: In the beginning, you learn from everybody. I studied inkers I liked. And inkers that I didn’t. Do your research and practice every spare moment. Show your stuff around. Get advice from everybody. Take it all in and decide what works, and even try the stuff that doesn’t — just to be sure. I felt everything was helpful. I took a deep dive into what makes a strong inker and took notes on what I needed to accomplish to become one.

I decided in the beginning, I wanted to be known as an inker that provided a “Bold” “Dynamic” “Clean” ink line that also stayed true to the penciler’s drawings. And to get the line I was wanting, I decided that I was somehow going to have to master the “Brush”. It would have to be my number one tool. I was told if I was ever going to be a great brush inker, the brush I must… No! HAD TO USE, was the Winsor & Newton Series 7 sable hair brush. Size 3 I think. And they weren’t cheap. I bought several Winsor & Newton Series 7 brushes, a bottle of India ink, and within a short few days, I had mastered this tool. 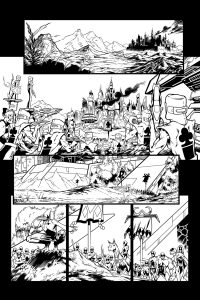 Not really. I proceeded to make a mess, spill ink all over the place, destroy quite a few expensive brushes, and ruin a lot of my clothes. Well before trying to ink a page of any kind, I knew I needed to get a handle on this thing. It could be done. I had watched others doing it. If they could do it, so could I. So I practiced by inking page after page of those thick to thin parallel lines that everyone tells you to do. Over and over again. Straight – bouncy – lines. Page after page. Once that started looking good, time to draw curved bouncy lines. You get it. Lots of bouncy lines. I got to the point, I could see the line before inking it. I don’t know about being perfect, but a lot of practice will get you pretty close.

The one other thing that greatly helped me get that super clean/sleek line I get with a brush, is learning to draw with your arm and not just your hand. I can draw/ink a very smooth curve using the rotation of my arm. So use that natural curve to your advantage. I have been told it’s funny to watch me ink. I’m flipping the page in all different directions, upside down even, to get the best angle. I’ve been asked quite a few times by a lot of people, “Thomas! What on earth are you doing?” Me, “I’m inking. Isn’t this the way you do it?

One thought on “Craft: Tommy Florimonte – Teaching Myself The Craft”