Hey there Silverline Readers and Comic Makers! I was able to get a hold of R.A. Jones and have him give us the low down on part of his writing process. R.A. has made quite the name for himself working on titles like Bullet Proof Monk, Star Trek: Deep Space Nine, and Wolverine & Captain America. As someone who has read a couple of R.A.’s scripts, I can tell you that the second you pick it up, you can immediately see how every detail would translate to panels.

This entry of Craft is about just that. R.A. goes over why writers should think about their comics visually and how he does that himself. It’s our hope that the following entry helps you, dear reader, go about writing your own comic scripts that develop synergy with your artist and better engage your reader.

Writers Are Artists Too – Or At least They Should Try To Be
by R.A. Jones

Years ago, a professional comic book artist gave me a hypothetical and somewhat exaggerated example of the kind of bad scripting of which writers are occasionally guilty. It went something like this:Panel 1: BATMAN AND ROBIN SLIDE DOWN THE BAT-POLES, RACE ACROSS THE BATCAVE, LEAP INTO THE BATMOBILE AND DRIVE OFF INTO THE NIGHT.The problem this presents should be obvious – though it always isn’t to some writers. The hypothetical scribe has asked their artist collaborator to visually portray at least four separate actions in a single panel!

Writers also sometimes forget that it takes longer to draw the Statue of Liberty than it does to simply write: Draw the Statue of Liberty. One of the quickest ways for a writer to get on an artist’s bad side is to hand him a script heavy with panels that are so elaborate, so full of characters and actions that he/she is practically reduced to tears of frustration.

A writer does not have to be able to draw any better than does a typical 5-year-old. But they do need to be knowledgeable about the ins and outs of visual storytelling. That is a talent that is often lacking even in those who can draw, at least early in their careers.

Stating that a writer needs to be able to visualize when they write is obvious in certain media, such as comic strips, comic books, and television and motion pictures. But it is a talent that is important to writers of prose as well; useful in describing people, places, and things and thereby creating pictures in the mind’s eye of the reader.

There is a bit of advice I’ve given to many aspiring artists over the years – and I would offer it to writers as well. Choose one of Alfred Hitchcock’s classic films (or director of your choice). Play that movie with the sound off and don’t just watch it – study it.

Get to understand the hows and whys of his varying camera shot choices – from establishing shots to close-ups. Study how he uses the camera to direct our eyes to where he wants them to go. See how much information can be conveyed without the need for any words at all. Develop an appreciation for the creative uses of lighting. 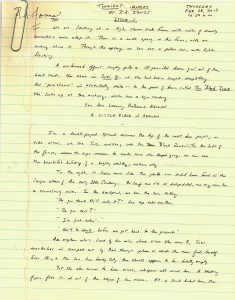 Then apply what you learn to your writing.

There, of course, is no single “right” way to write a comic book script, but I’ll tell you about mine; you find the method that works best for you. This applies to my preferred method of writing a story – full script – but can also be applied when employing all but the briefest and loosest of “Marvel Style” scripting.

First, I write myself a short plot synopsis of that story/issue: usually no more than 3-5 pages long. Along the margins of that plot, I make pencil notations regarding how many pages I think each scene should require to be told visually. Among other things, this lets you know if your plot is too dense for the space allotted and adjust accordingly.(You will find few if any artists who are happy about working on a script that requires them to cram 12 panels into each page to get all of that story into 20 pages!) 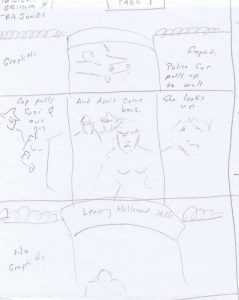 Once I’ve done this, I literally draw the entire issue myself. Full disclosure: my “drawings” are extremely simple and crude, sometimes little more than stick figures. But that’s all I require to make sure the pacing is correct and to be able to fully and understandably explain to the artist what I want from each panel of each page.

Only then do I write the actual script that will go to the editor and artist. If I can draw the story within the required limits and without cramming too much into each panel/page – I know any good, professional artist can comfortably do so as well.

And be flexible; even the method I’ve described should allow artists to flex their creative muscles in terms of layout, etc. Don’t let ego prevent you from recognizing that their visual ideas and instincts can be better than or improve upon your own.

Doing your job well in visualizing your story – makes it easier for your artistic collaborator to do their job!