What’s in store for Silverline for 2022?

The best laid plans of mice and men, right? While we’re going to go through with this post, it’s offered with the full knowledge that this may change as the year progresses. Heck, it may even change by next week. Still, hopefully this will give you a general idea of where we’re headed and what’s up for this new year.

What Silverline books should we see KS in 2022?

If you’re making plans for your comic reading in 2022, we’d be honored if you include Silverline in your plans; we’re planning to KS every other month. So, Jan, Mar, May, July, Sep, and Nov. There will be no three months in a row this year as that just about killed us—well, at least Roland! OUCH. So, those of you who work with some pretty strict budgets, make note of those months on your calendar!

Which books, you ask? Well, as you know, we don’t kickstart them until we’re done, but based on production status as of this post, here’s a list of the 12 comics we expect we’ll crowdfund this year (in no certain order):

So…yeah, as you can see, that’s more than 12 comics. So, it really just depends on which ones get finished first. We DO know which one will launch next week: Rejects #1 and Sniper & Rook #1 (vol2, the introduction of SNR into the Silverline world). In fact, you can SIGN UP TO BE NOTIFIED ON LAUNCH by going to this link (please do this if you will): https://www.kickstarter.com/projects/silverlinecomics/sr1r1

Rejects is one of those projects that has been on the stove for some time in one form or another, but it really came to life when C. Michael Lanning signed his name on the dotted line in 2020 (yes, it has taken THAT long to make it happen!). C. was coming off another project that ended up going nowhere, and while his pencil work there was good, the work he did on Rejects seemed truly inspired. We think you’re going to be truly amazed at it!
Rejects is a story about a team of Rejected superheroes who want to earn recognition. Roland Mann is writing, Thomas Florimonte is inking, and Haley Martin is coloring. 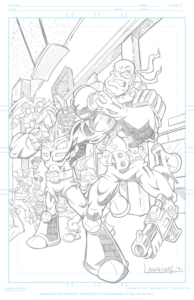 Yes, THAT Sniper & Rook! Long time fans of S&R will be happy to hear of their return.

Jack Barton (Sniper) and Rebecca Paige (Rook) blast back into comics in their roles as undercover, covert military operatives serving the United States of America directly under the command of decorated General Davis Jefferson. From the United States to the Soviet Union to Japan, and from political theater to mythical creatures to historical coverups, their previous missions have not only spanned the globe, but have also traversed genres. Their newest mission may very well take them further than ever before in both regards .

“Sniper & Rook: Area 50-wha??” chronicles the tale of their mission to the most well known top secret location ever – Area 51 – and launches our duo full-force into a confrontation that’s been over 75 years in the making, ever since the “weather balloon” crashed in Roswell, New Mexico .

Sniper & Rook: Area 50-wha?? #1 is science fiction/superhero, full color 24 pages, is the first of a three issue mini-series. Silverline is proud to be the publisher that ushers in their return and introduce them to a whole new set of readers. This issue is just the first of many, and we can’t wait for you to see what the future holds for them. 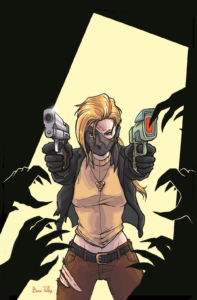 In the works are two new streams that we hope to be presenting in the coming weeks. One will be limited in the number of weeks and will be more educational (making comics!), the other will be more fun, but a little different. More on that as we can tell you more, but we’re always trying to create more content for you!

If you are a regular watcher of our streams, you’ve likely gotten sneak peaks as some of the upcoming material and/or have heard us talk about them. Since this time last year, we’ve added these titles to our ever-growing line-up:

We produced a Signature Book that debuted at Christmas of ’20, and had it with us the entire year. In ’22, that book will be a little different as some faces will rotate off and new faces will rotate in, but the concept will be the same. We’ll have a different colored cover to help you know the difference (and us, too).

Whew…that’s it for now. Hopefully you’ll tune in as you can to the streams to watch as these projects take shape.

Thank you all for the wonderful support you continue to give. And remember to