Hey there Silverline Family! I got a hold of Haley Martin who is something of an auteur. You can really see this with her ongoing comic Heroic Shenanigans. She does everything. For a lot of people looking to get into comics, this is the natural way to get your first story/book done and out there. Haley was gracious enough to share some tips on how to look past the daunting work and keep your eyes on the goal as a creator. Hopefully, after this, you feel like you have a bit more of an idea of how you can bring your passion to life.

I dove headfirst into comics by making my own from scratch: writing the story, designing the characters, and sketching, inking, and coloring the pages. It’s a lot of work for one person! I’ve since experienced how much quicker and more streamlined the comic-making process can be when working on a team, but if you’re like me and enjoy having your hand in every step of your passion project, there are ways to speed up the process and keep yourself organized.

Have a checklist and a schedule, but be flexible. When I sit down to work on one of my comics, especially if it’s been a while, I can feel overwhelmed by how much work stands between me and a completed page. That’s when an organizational tool like this spreadsheet from comic artist Michael Regina is very helpful. Just plug in how many pages are in your comic and all the steps that are needed to complete a page (thumbs, inks, flats, etc) and then update the spreadsheet when you finish a task. It’s really satisfying to see that percentage go up and give you an idea of how close you are to completion. If you’re working on a large graphic novel project it may be helpful to break it down into chapters/issues rather than tackling a whole 200+ page book at once.

If you’re working as part of a team, the inker generally needs to be completely finished with a page before the colorist can start their job. But if you’re doing all those jobs yourself, you have the freedom to jump around. For example, I might be struggling with the sketch of a particular panel and need to look at it later with fresh eyes, but another panel on the same page might be ready for inks. So I’d start on that one before the pencils of the whole page are technically done. As long as the comic gets done and done well, it doesn’t matter if you do the steps a little “out of order”.

However, you don’t want to go so crazy with it that you get confused and forget steps. And you don’t want to finish all of your favorite parts of the process and then leave yourself with a full workday of only the tasks you don’t enjoy as much. As one of my college drawing professors said, “leave yourself a candy bar”. Save a part of the process you know you’ll enjoy as a reward for completing one of the less fun parts.

I know I’ve advocated “jumping around”, but you don’t want to do that all the time. You’ll get more done at a faster pace if you let yourself get into the zone. You’ve no doubt heard how important it is to warm up. If my first sketches of the day are frustrating, I’ll try to push through because I know my hand needs time to warm up. Next thing I know, an hour or two has passed and I’ve sketched more panels than I planned because I got on a roll.

The last thing I want to mention to help you juggle your different comic-making tasks is to set up a schedule. That spreadsheet I mentioned earlier can help you see how many steps you need to get done, and I would advise taking it a step further and outlining when you plan to work on each step. Schedule your work out so that you’ll be able to get the project done within your deadlines, but also leave some wiggle room. Life happens, so I find it better to give myself a range for when a task should be completed rather than a hard-and-fast I need to work on this specific task on this specific day. For example, I could schedule myself to ink page 12 on Monday and page 13 on Tuesday, or I could say I’m going to spend Monday and Tuesday inking pages 12-13. What’s the difference? Say I end up having more time on Tuesday than Monday, so I only ink half of a page on Monday but ink a page and a half on Tuesday. All the work gets done in the allotted time, but I can be more flexible about when it gets done within the time frame.

Remember, all this is just the advice of one artist, and you should do what works best for you. But I believe that once you have a system in place, your projects won’t be nearly as daunting and you’ll be finishing pages before you know it!

Up this time is Rob Davis, an artist who has worked for such comic titles as Scimidar, Merlin, Straw Men, Maze Agency…as well as the recent Twilight Grimm for Silverline Comics, of course–for which the 2nd issue is kickstarting right now: https://www.kickstarter.com/projects/rolandmann/tg2fr2 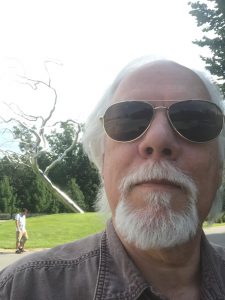 My name is Rob Davis. I hail from the state of Missouri and have my whole life.

My greatest claim to fame, such as it is, was on the Star Trek books for Malibu and DC comics in the 1990s. Deep Space Nine for Malibu, Star Trek (Kirk, Spock, McCoy in their movie incarnations), and a single issue of Next Generation for DC. My first big “break” was before that on R.A.’s SCIMIDAR book for Eternity Comics—a precursor to Malibu. 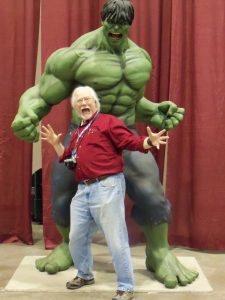 I just recently retired, so I don’t have a “day job” anymore. I do, however, drive a bus for a local college. Mostly I transport their Mock Trial group but I also have been tapped to drive for the Volleyball and Bowling teams as well as shuttle the college’s International students on fun field trips. I’m hoping to dive into Model Railroading and finally do some work on my N-Scale layout that’s lain dormant for about 20 years.

It’s in the blood. I fell in love with comics as a kid and have never gotten over it despite it kicking me around once in a while. It scratches a lot of my creative itches. 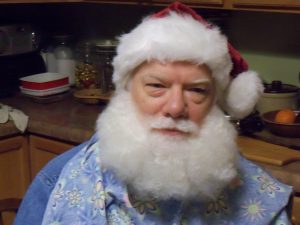 I don’t think I ever had that particular thought. Mine was, “this looks like a cool, creative thing to do. I’m going to figure out how I can do that!” That first thought came reading AVENGERS issue #2. Kirby IS king!

I mostly listen to the oscillating fan in my studio run. I used to listen to NPR/Classical music in the studio many years ago but the stereo radio I had burned up and I have yet to replace it. I could use the desktop computer I have in the studio to either tune in via the internet or play my collection of mp3s but I’ve gotten used to not having anything playing and just “zen out”
drawing. 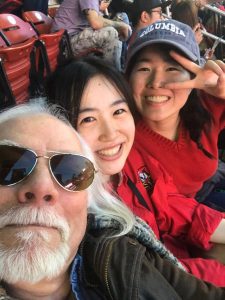 The aforementioned Jack Kirby is the biggest, but I’ve been accused of channeling Curt Swan
(long time Silver age Superman artist) and feel some influence from Gil Kane.

Oh, lord! I hate to bring that up but I was letterer and inker on SYPONS for NOW comics back in the late 1980s. The writer/artist on the series seemed to really despise my inking, so that’s a hard one to bring to memory. It was an interesting concept playing off the X-Men/Teen Titans vibe. 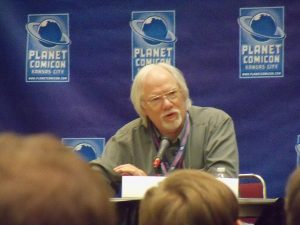 Wow, I’m not reading much these days. I liked Grimjack, and Badger back in the days when they were active. Concrete is another favorite. Maze Agency by writer Mike Barr is in there, too. I probably should widen my horizons but not much that I see of today’s comics excites me. The last independent that looked interesting and I tried was so thin plot-wise I gave up on it after a couple of issues. I remember the days when you got three eight-page complete stories in a comic book. Anyone who has some suggestions can goad me on Facebook. 🙂

Toughen up and widen your network. When the industry imploded in the mid 90s my connections had moved on and out. I did start to move that way but kept getting the rug yanked out from under me on projects: editors dying, creators yanking their projects from publishers and publishers not quite making up their minds what they wanted. That was a rough period that was hard to take. 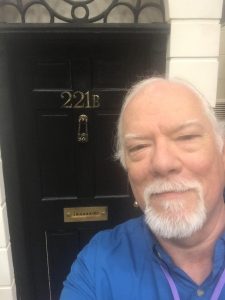 Ew! Neither. No asphalt or concrete for me. Spread my ashes over a sunny, green spot.

This should have come to you yesterday (Tuesday), but I was busy putting some final touches on the Kickstarter, which goes live on Thursday. Kickstarter has finally added the ability to include ADD-ONS to a kickstarter campaign, and it took me a little extra time trying to figure it all out. I’m still not 100% sure I got it right…but I guess we’ll see in a few days. 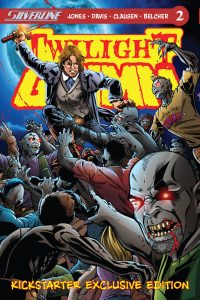 Like most of our kickstarters, there’s a lot of original artwork just waiting for you to snag and put on your wall! And like always, we’re going to count on you to help spread it around and let people know they need to come back us and help independent comics!

The kickstarter exclusive covers are both pencilled by Peter Clinton, and up-and-coming superstar who’s working on the upcoming Silverline Team-Up: Champion and Miss Fury. He’s cranking it out—already on issue #2—and it’s looking great! So if you want his covers on these books (and you DO!), you’ll need to get over and back the kickstarter. You can go ahead and sign up for it here and you’ll get a message when it goes live: https://www.kickstarter.com/projects/rolandmann/tg2fr2/

Just a reminder that we stream twice a week, Sundays and Wednesdays at 9pm EST. It’s pretty interactive, so tune in and ask us questions!

While the Discord server is live, it hasn’t been that active. We’ll take suggestions and recommendations as to how we can make it better for you. Here is your invite to join our discord server: https://discord.gg/7dnAp9Yy

Slowly but surely, they’re restarting. Roland will be appearing at OLO on March 28 in Orlando, Fl. More new to come as we get them scheduled.