I was able to grab a snippet on lettering from Dan Hosek.Dan is a Silverline creator currently doing the colors on Steam Patriots, but he has done just about every job in the business and he has done them well. That makes him a total beast in comics and someone definitely worth listening to. Here he talks about lettering, and how he developed his style as the industry was changing.

Lettering: From Hand to Digital

Typically, five tasks have to be completed to make a comic book: writing, penciling, inking, coloring, and lettering. Of those five jobs, lettering is probably the least glamorous, but it is also one of the most important in making a comic book feel “professional.” While good lettering might not make a comic a masterpiece, poor lettering can make it stick out like a sore thumb.

Let me start with a little history. I worked at Marvel Comics as an assistant editor in the mid-90s, a time that was seeing the medium move from traditional “hand” methods of creation to the digital methods used today. The two jobs (at the time) that were most directly impacted by this move were coloring and lettering. Before the move to computer lettering, all comics were hand-lettered.  The tools of the trade were an Ames lettering guide, speedball pens—with different tips (or nibs) for bold and plain text, an Exacto knife to cut out all the caption and word balloons, and rubber cement to paste it to the artboards (the great Todd Klein has an awesome visual description here: https://kleinletters.com/HandBasics.html)! If there were corrections, they had to be pasted on top of the errors in the balloons. Hopefully, editors (like me) wouldn’t want any serious dialogue overhauls, but when they were needed, Marvel’s fabled Bullpen came to our last-minute rescue many times! 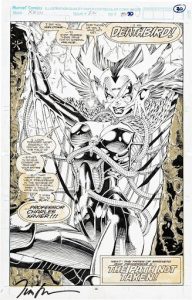 Pat Brosseau’s pasted up lettering from Jim Lee’s run on X-Men. The rubber cement has yellowed over time.

Sometimes I don’t know how things got done in a timely matter in publishing before computers. The switch to digital made the process of lettering (and corrections) simpler. The first person I remember working with who switched to all-digital lettering was Richard Starkings. Though I’m sure there were other pioneers blazing the trail with him, I remember Richard’s company, Comicraft, being the first computer letterers used by Marvel before other “traditional” letterers also began to make the switch. These days, hand lettering is very rare.

With that brief history lesson out of the way, let’s talk about the positives and negatives of digital lettering. The traditional method required a greater skill set than what’s required of lettering with a computer.  On top of knowing where to place balloons, how to place them to read in the correct order, and the basics of laying out a page, a letterer also needed the skill to create letterforms that were uniform in size, legible, and could even convey emotion.  A skill that had to be learned and honed. Not to mention the talent needed to hand-letter killer sound effects and title treatments!

With digital lettering, the latter part of that skill set is not needed. Places like blambot.com have many comic lettering fonts available for free and Comicraft licenses their fonts for a fee, just to name a few resources. And while it’s nice to have this available, as with other things that have entered the digital realm, having the fonts and Adobe Illustrator does not necessarily make one a letterer. I have seen many indie comics with beautiful art destroyed by amateurish lettering (thankfully that’s not the case with any Silverline titles!). My first attempt at lettering had many flaws, the worst of which was way too much space in my balloons (thanks to my friend and letterer extraordinaire, Paul Tutrone, for pointing that out). Over time and with practice, my skills have gotten sharper, but I’m of the thinking that one is always a student and always has more to learn. 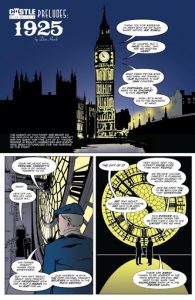 You could fit a Star Destroyer in all the “air” in those balloons. And I should take my own advice—just because I have a pencil, it doesn’t mean I’m a penciller! 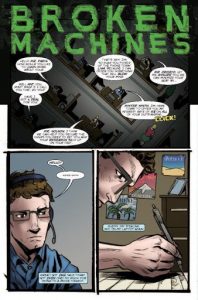 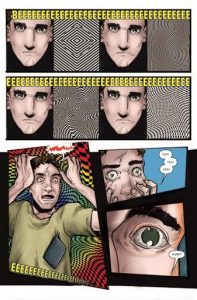 My lettering somewhat improved over time.

A letterer’s job is always to help tell the story. Today, some of the most important things a computer letterer can do are not get in the way of the art by keeping balloons and captions off of important story elements and make sure everything reads in the proper order. Although computers have taken some of the “human touch” from the art of letterforms, the digital age has opened the door to allow more people to try their hands at lettering. With time, new styles and forms will likely evolve from this change, a small example being how some comics use upper- and lower-case letters in word balloons, something almost absent in comics before computer lettering. Innovation and change are something comic books have always been good at and I look forward to seeing what the future holds.