Hey Silverline Family! I was able to reach out to penclier C. Michael Lanning and ask him to tell us a little bit about how his brain works. He was gracious enough to oblige and decided to do me one better. In the following article, C. Michael explains why his brains works the way it does know. This is a great piece on not just how he crafts his art but why he crafts it that way! Please read on as C. Michael talks how he relearned how to draw and how that affects his character designs in comics.

Shapes of Things to Come

Constantly, Facebook groups are filled with people begging for advice on how to start drawing. Just as consistent as the question, is the answer, “learn anatomy.” I’m here to tell you that if you’re new to drawing, learning anatomy first is the worst thing you could do for yourself. Especially, if your medium is sequential art.

What?! How could I speak against such sage advice?

Simple, I made the same mistake. When I picked up the pencil again after so many years, I joined a class taught by David Finch on superhero anatomy. I mean, why wouldn’t I? It’s David Finch. So, I learned where the muscles go and what muscles to look for in the pectoral region and yada yada yada. So on and so forth. Here’s the thing, in comics, you have to know how to draw everything, and drawing a bicep isn’t going to help me draw a Buick. Really, I had taken this moderate class as a beginner instead of waiting to learn the foundations first. The foundation of shapes.

Before you blow out my eardrums yelling at me about having learned your shapes back in kindergarten, understand what I mean. How many times have you picked up a drawing book instructing you to draw a face using a circle and some lines? Is it wrong? No…and yes. In my opinion, they are teaching you to think two-dimensionally instead of three-dimensionally.

Have you done it? Have you followed those steps wholeheartedly only to find yourself staring at a flat drawing? Wallowing in confusion and minor hair loss, trying to figure out what you could’ve done wrong? You drew the circle. You added the lines. Why doesn’t it look like a masterpiece?!

It may be because you drew a circle when you should’ve drawn a sphere. What’s the difference? Perception…and three dimensions. 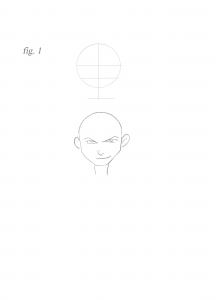 Look at Fig. 1, I used a simple circle and line construction. Now, in Fig.2 I thought of my circle as a sphere, and followed the form with my pencil, like tracing the roundness of a ball. If you don’t want flat drawings, don’t draw flat. Just imagine you are drawing on the three dimensional surface of your subject. This thought pattern is going to apply to everything you draw and, once you start seeing shapes in this 3D form, you’re going to recognize it in everyday life. 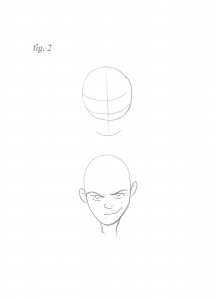 Warning, you’re going to stare…a lot, but you’re not a creep. At least, let’s hope not. Your staring is actually observations of the shapes and forms creating poses, folds in clothing, and numerous objects. Afterward, you’ll be able to visualize how that bicep you learned to draw fits into a greater dynamic form.

Dynamic forms are new shapes morphed from your understanding of 3D form. For instance (Fig. 3) your forearm could be considered a triangle. When you morph it into a cone it becomes 3 dimensional, but don’t stop there. Add the dips and the roundness you’ve noticed from being an observer and it morphs into the outline of a forearm, into a dynamic form. Now, the muscles you learn from studying anatomy fit into that form. Understanding forms and shapes first make learning anatomy easier than if you had studied anatomy first. 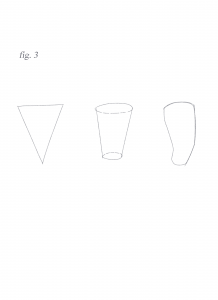 Morphing your squares into cubes, triangles into cones and circles into spheres is going to increase your understanding of form exponentially. So much so that if you’re presented with a challenge of having to draw something you’ve never drawn before you don’t have to run out and get a step by step book on how to draw it. Observe the subject then apply your knowledge of shapes and forms into figuring out how to draw it. It’s not the only key to drawing, there’s always more to learn, but this foundation will keep you from suffering more than you have to.

The great thing about this foundation is that it helps no matter what style you want to draw. If it’s cartoonish or realistic (Fig. 4.), you’ll be able to switch back and forth depending on what the project calls for. 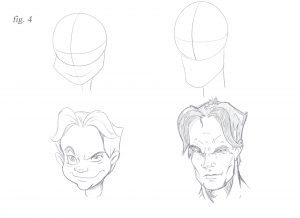 So learn those shapes, study those forms, and become a creep…I mean an observer.