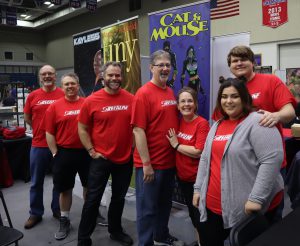 Up today is Chuck Bordell, who has inked for such publishers as Malibu Comics, Caliber Comics, Brainstorm Comics, Alpha Productions, and of course, Silverline Comics. Chuck has even produced art for Steve Jackson Games and Dungeon Magazine.

So, who are you and where do you hail from? 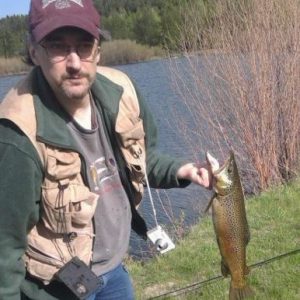 I’m Chuck Bordell and I grew up in Pennsylvania, but I’ve been living in Montana for the last 30 years. I stayed for the trout fishing and the 8 feet of snow we get every year, Oh yeah I’ve come across several bears as well. You’ve never felt fear until you see a bear in the wild…couple of locals, amongst others.

What would you say it is you do here?

Well, I mainly work as an inker, but I’ve done some pencil jobs as well.  I’ve done a LOT of books for Silverline, including Silverstorm 2, Marauder, Sirens, and Switchblade. Right now I’m inking White Devil.

Where might Silverline readers have seen your work previously?

When you’re not making great Silverline comics, what do you do in your spare time? What are your hobbies?

I collect coins and militaria, enjoy fishing and visiting art galleries.  Studying the Civil War is also a passion.  I’d like to make another trip to Gettysburg in the near future.

Many creators at Silverline have been in the comics industry for years — what’s kept YOU plugging away at comics? What do you enjoy most about the medium, as well as your specific trade? 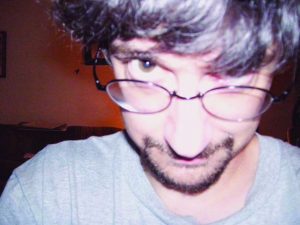 I just love the art form. It’s totally unique. That combination of images and words is just magic. There have been times when I thought of giving up, but I always come back to comics.

What was the first comic you remember reading that made you think, “Hey, I could do this!”

Probably a Ross Andru Spiderman from the mid 70s. He’s one of my all-time favorite artists. .I think his run on Spiderman totally defined the character for me. My Mom still has Spiderman comics I made when I was about 10.

I mainly listen to Metal, including Metallica, AC/DC, Triumph, Dream Theater, Megadeth, Kiss, etc,  Always good to play while drawing. I need music that can keep my brain cranking while I’m working.  So yeah I’m a metalhead, although I cut off my long hair a couple years ago.

Who were some of your earliest influences on your trade?

Ditko, Kirby, Miller, Andru, Golden. If I could have Frank Miller’s storytelling with Michael Golden’s art, I’d be a happy dude. But all of them show such creativity that I’m amazed every time I see their work.

What was the first comic you ever worked on professionally?

A book called Totem, drawn by Paul Pelletier, published by Alpha Productions. It was an ink job I did completely with Rapidograph pens!  Last time I ever did that. I now have so many inking tools that I need one of those mini-houses to keep everything in!

Can you still read that comic today without wincing?

Nope. It makes me totally embarrassed even if no one else is looking,  I mean it’s not totally hideous, but my style has change a lot over the years.  Brushes are my friends now, and I use a lot of Micron Pigma pens.

What are some non-Silverline independent comics you would recommend to readers?

Courtney Crumrin, Bone, Pogo (that’s an old one, but it’s brilliant) any of the EC war books. I will pick up books I’ve never heard of before just to give them a chance. It’s only a couple bucks and you never know when you’ll find  treasure.

If you could go back in time and give your younger self one piece of advice that would help them better navigate the comics industry, what would it be?

Write and draw your own work. It’s the best way to learn and it’s the most satisfying. Even if it never gets published, there’s a satisfaction to finishing a book that’s totally your own.  I bet just about all comic artists/writers have unpublished projects in their archives. 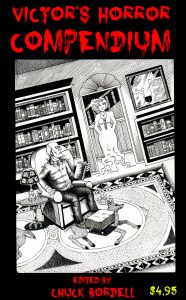 After you die, would you rather your memory be memorialized with an overpass or a parking lot?

A parking lot. Open space in all directions. Then there could be enough parking for a comic convention. Chuck’s Blacktop Convention sounds good. A combination comic book/flea market/fantasy/coin show.

Chuck is currently busy inking Silverline’s upcoming White Devil written by R.A. Jones with pencils by Jaxon Renick. What, you didn’t know about that yet? No announcements have been made yet—but you heard it here first! Also, Chuck and Roland Mann collaborated on a civil war short that was published in Chuck’s Victor’s Horror Compendium.